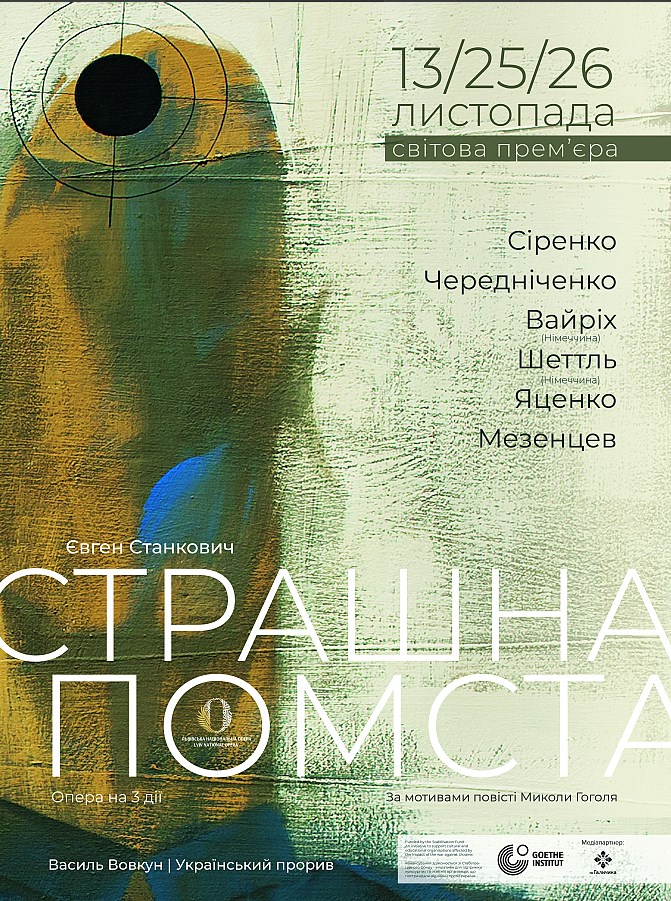 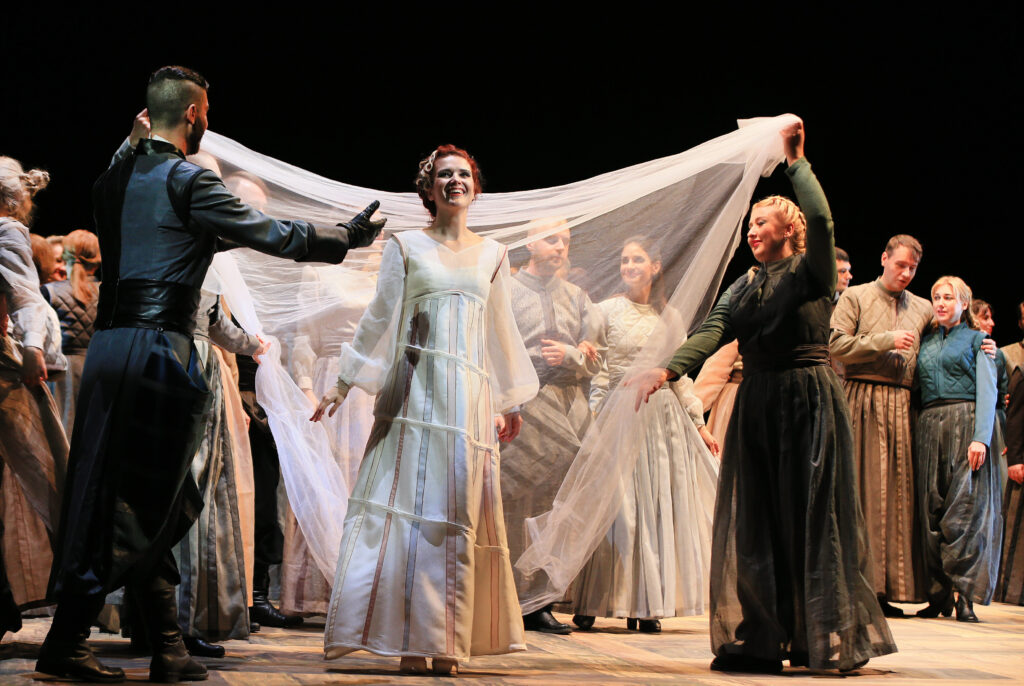 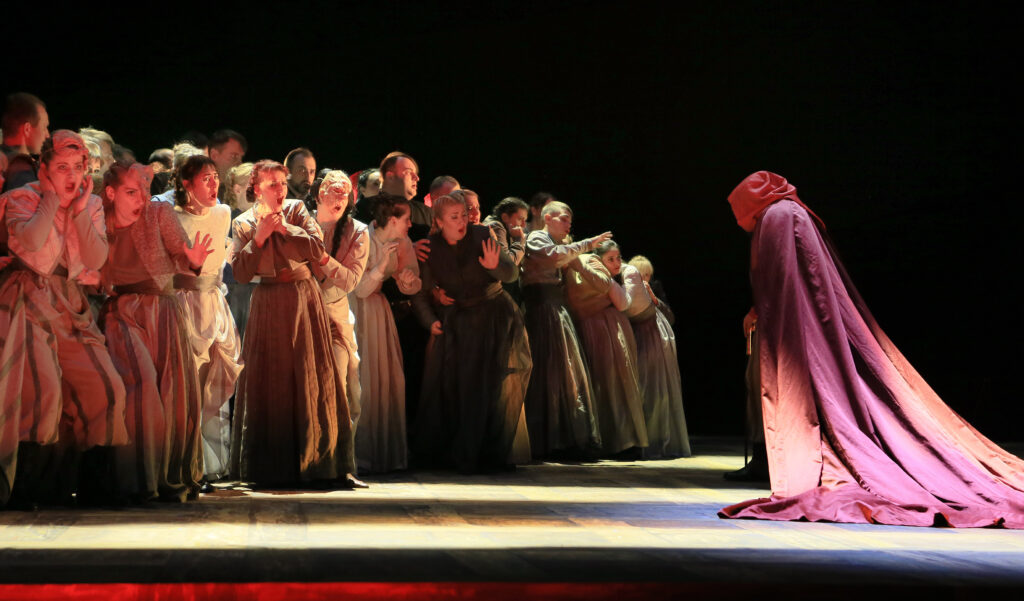 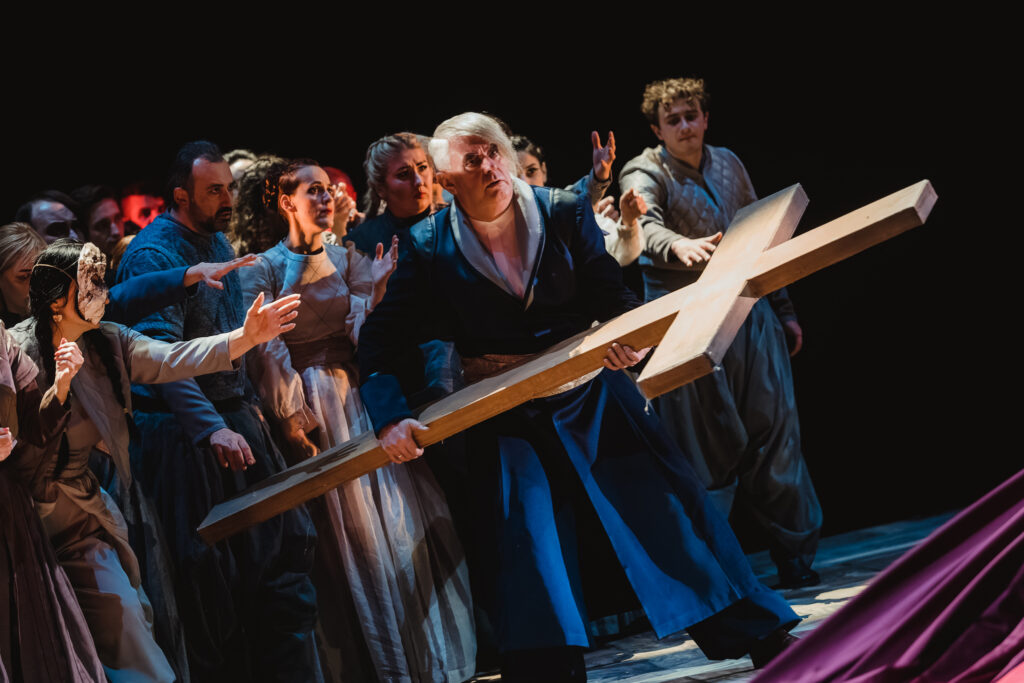 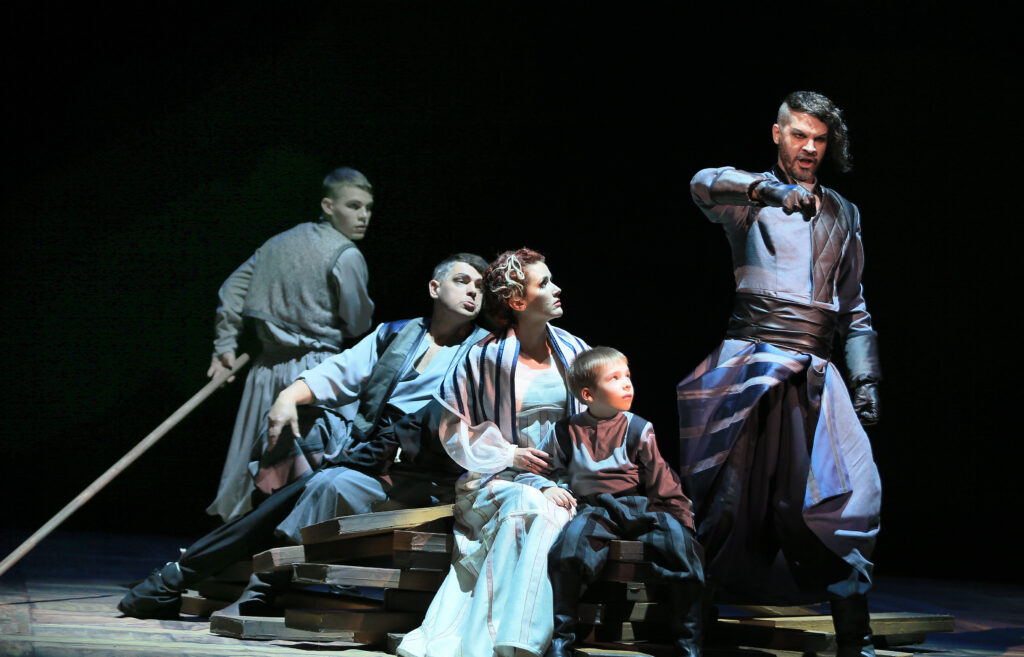 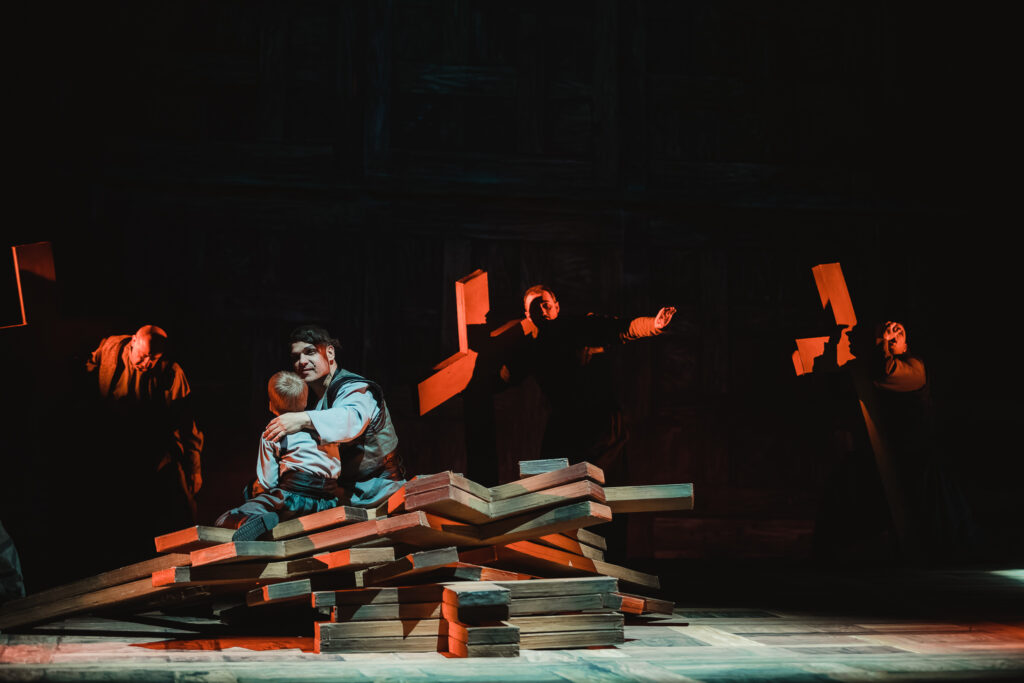 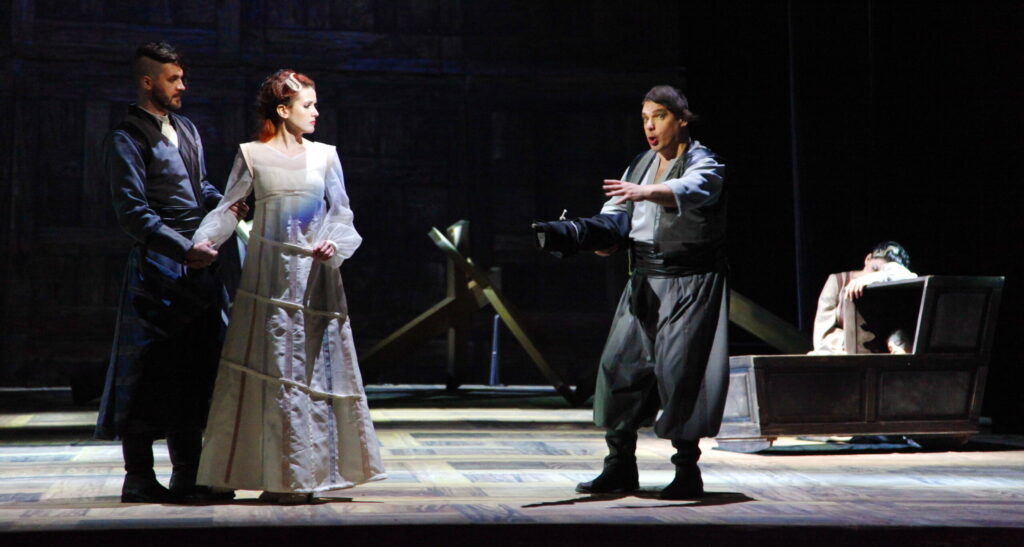 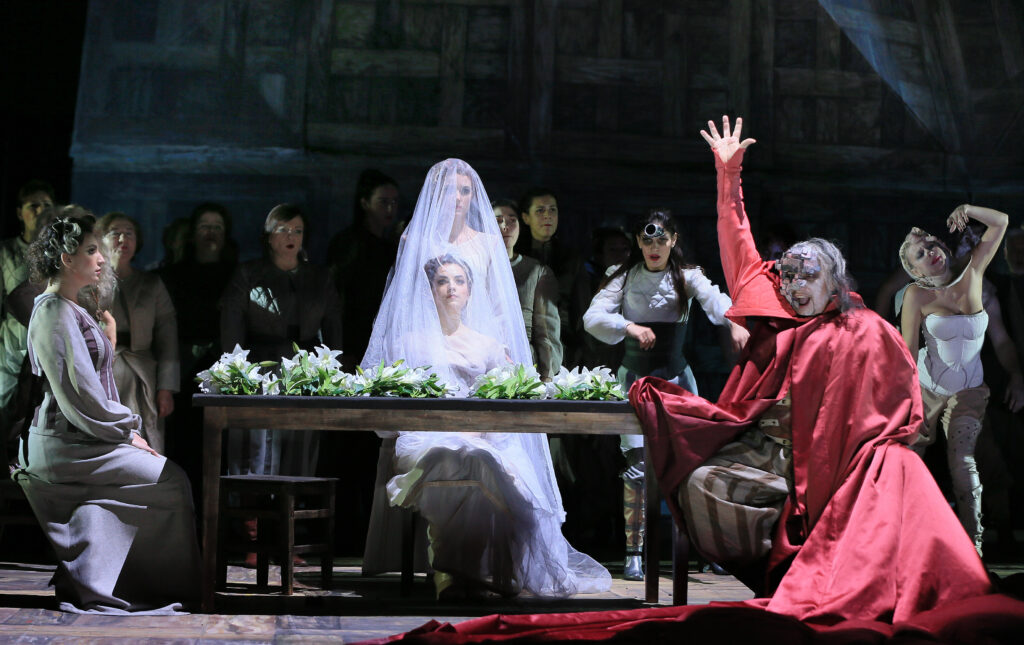 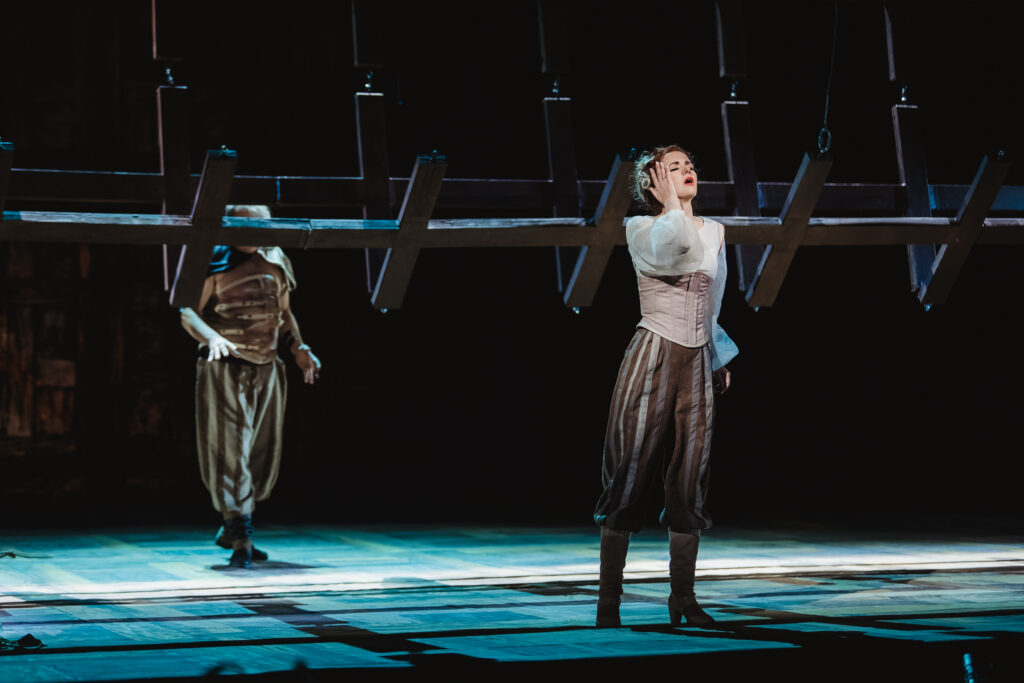 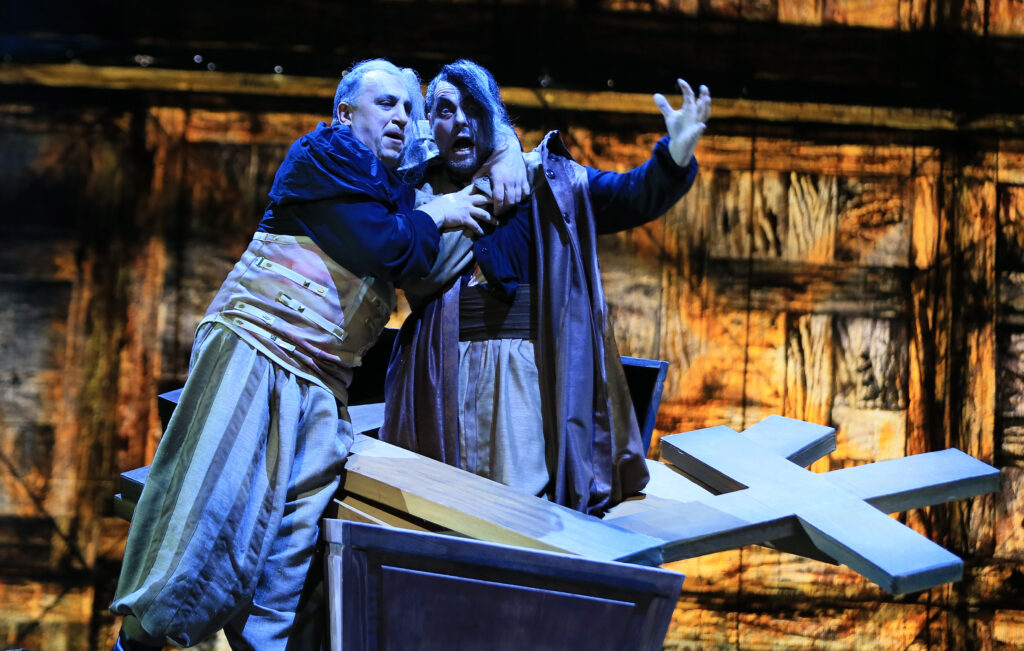 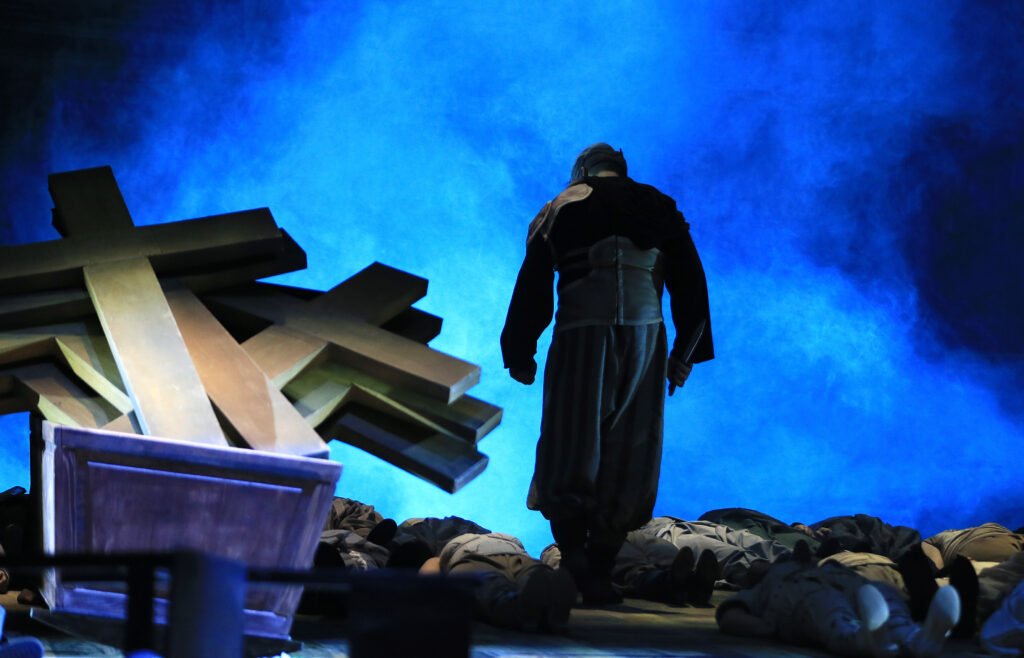 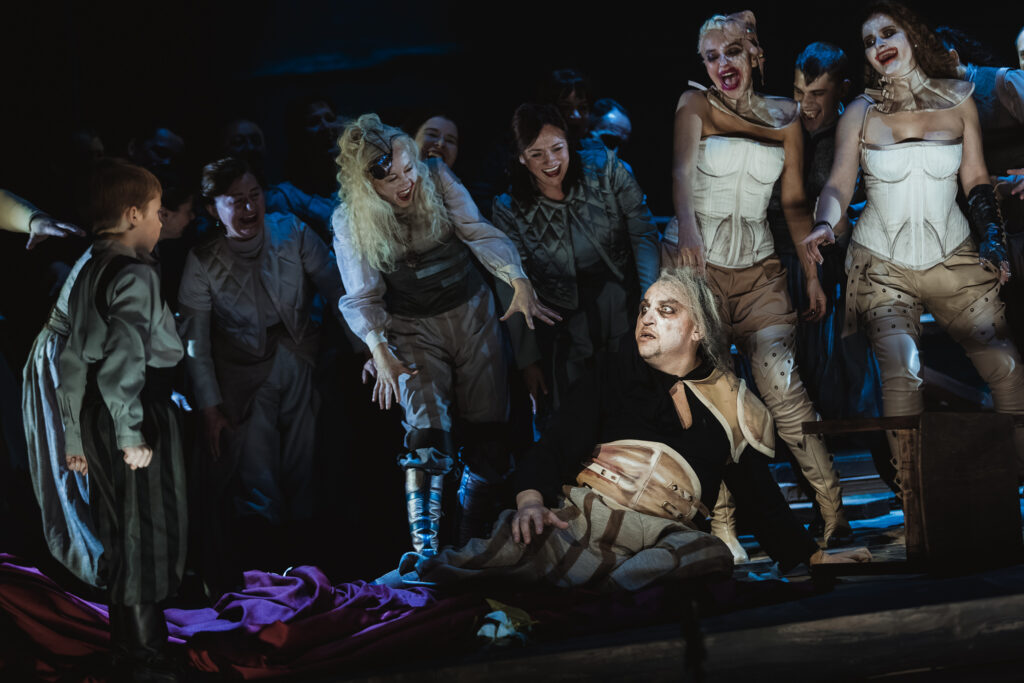 The world premiere of the opera “The Terrible Revenge” at Lviv National Opera is dedicated to the 80th birth anniversary of the modern Ukrainian composer Yevhen Stankovych.

A mystical story about severe punishment for terrible crimes reflects contemporary events; the performance is highly relevant in the context of our collective revenge for the barbaric crimes of rashism.

German director Andreas Weirich and set designer Anna Schoettl present a personal interpretation of Gogol’s novel as an author’s version of the biblical story about Cain and Abel.

Spectacular and intellectual Ukrainian opera has never been that modern.

The production is financed by the Stabilization Fund, an initiative to support cultural and educational organizations affected by the Russian-Ukrainian war.

Fragments of the triptych “Targets” by the modern Ukrainian artist Liubomyr Medvid are used for the poster design.

The opera is performed in Ukrainian

Danylo Burulbash, with his wife Kateryna and his son, comes to the wedding of Osavul Horobets’ son. Osavul blesses the newly wedded couple with an icon. Suddenly one of the Cossacks turns into a Witcher. Horobets, holding the icons, scares away the villain, but the guests take it as a bad omen.

Danylo, his family and the Cossacks sail home on a boat. The Cossacks are alert, and Kateryna, who is rocking her sleeping son, is also worried. Danylo asks Kateryna why she is sad, and his wife tells him the horrifying stories she heard about the Witcher. Burulbash assures his wife that she has nothing to fear.

The boat sails by the old cemetery. Cossacks hear screams echoing from the graveyard. The crosses on the graves begin to swing, and the dead rise from the graves. Danylo comforts Kateryna and her frightened son. He tells his wife that he is much more worried about her father, who has recently behaved strangely. He is very gloomy and grim and pays no attention to his little grandson.

Farmstead of Danylo Burulbash. Kateryna’s angry father enters and asks his daughter why she came home late. Danylo stands up for his wife. Kateryna’s father starts quarrelling with Danylo. The men grab sabres, and in a fierce fight, Kateryna’s father wounds Danylo. After long pleas from Kateryna, the men finally reconcile.

The next morning Kateryna tells Danylo about her strange dream. In her dream, she saw that her father was the terrible Witcher they saw at the wedding. His wife’s dream alarms Danylo because dreams often tell the truth.

Danylo and his servant are on the beat. Kateryna feels terrible after last night’s dream. She asks her husband to lock her in a room and put Cossacks on guard.

Danylo notices how his father-in-law is heading somewhere. He decides to follow him, and from an ambush, he sees how he turns into a Witcher. Suddenly Danylo notices Kateryna’s shadow. The sorcerer’s magic summoned her soul while she was sleeping. Shocked, he returns home. Kateryna wakes up and tells her husband that she had another nightmare about her father. Danylo tells his wife that it is not a dream and that her father is an evil Witcher.

The Witcher is chained in Danylo’s cellar. His lair is burning above the Dnipro-river. Kateryna passes the cellar. The Witcher begs his daughter to save his lost soul and let him go; he promises to go to the monk’s caves and pray for his sins. Kateryna hesitates but finally frees her father, and as soon as he disappears, she realizes what a grave mistake she made.

An old maid takes the barely conscious Kateryna out of the cellar. The woman confesses to the old woman what she did. An angry Danylo rushes in and says that the Witcher has escaped. He assumes that someone freed him. “What if it’s me?” asks terrified Kateryna. “Then I will put you in my bag and drown you in the Dnipro river,” Danylo rages.

Thoughtful Danylo sits at the table in the room. Kateryna sings. Burulbash’s heart is heavy; he asks his wife not to leave their son and foresees his imminent death. The Witcher appears with demons and kills Danylo. Stetsko calls Kateryna to bid farewell to her husband. A widow cries and mourns, asking to be buried with her husband.

The weather is fine and beautiful Dnipro flows calmly. Insane Kateryna appears and sings: “The bloody cart is running, And the Cossack is lying in that cart, He is shot, he is chopped. Crows cow on the sycamore, Mother cries for the Cossack”.

An old Hermit prays in a cave. Suddenly, the Witcher enters and asks him to pray for his dammed soul. The holy Hermit takes the book and retreats in horror – there is no forgiveness for such a deadly sinner. The angry Witcher kills the old man. A terrible moan echoed through the field and forest. In despair, the Witcher realizes that the family curse has come true. Sins overtake him, and he dies in agony.

Insane Kateryna appears with her son in her arms. In the distance, the terrible howl of the Witcher is heard. Kateryna sings: “The bloody cart is running, And the Cossack is lying in that cart, He is shot, he is choppe. Crows cow on the sycamore, Mother cries for the Cossack”.

The Lord said, “What hast thou done?
The voice of thy brother’s blood crieth unto me from the ground.”
Genesis 4:10

Creating the libretto for the opera, the composer closely adhered to the source: “He (Gogol) accurately and precisely outlined all the heroes’ thoughts, places, actions and words. Not everything was used in the opera, but I tried to preserve the main concept of the story “The Terrible Revenge” in my libretto.”
Due to unfavourable circumstances, the creation of the opera ceased, and it was not premiered. In a decade, at the initiative of Lviv National Opera Theatre, the opera was finished.

“The Terrible Revenge” is based on Gogol’s reinterpretation of the well-known biblical legend about Cain and Abel from the Book of Genesis, the story of jealousy that led to a brutal crime. It has been and still is relevant throughout the centuries. It has influenced art through allegories and symbolic parallelisms in images and plots.

The legend was reinterpreted in Mykola Gogol’s story “The Terrible Revenge”, where Petro, seeking revenge on his brother Ivan out of jealousy, pushes him and his young son into an abyss. After his death, coming to God’s judgment, Ivan asks God for a villain who would be the last in his family of Petro and for whose sins all his ancestors would suffer. And Ivan will become the Horseman, who, sitting on his horse on the top of the mountain, will watch his brother’s torment for the rest of his life.

German artists, director Andreas Weirich and set and costume designer Anna Schoettl were invited to join the creative team of the production of “The Terrible Revenge” for the second time. They are known to the audience of Lviv Opera for the successful premiere of Dmytro Bortnyanskyi’s operas “Le faucon” and “Alcide”.
The production of “The Terrible Revenge” by Yevhen Stankovych brought a new experience to the German creative team in working with Ukrainian folklore. According to the director Andreas Weirich, it gave them a certain freedom of interpretation of Gogol’s story and the opportunity to look at Ukrainian history from a somewhat different perspective. Designer Anna Shoettl says: “Cossacks play a big role in our story. As a foreigner, it was interesting for me to dive into the world of Cossacks and take fragments from the different times, influences and cultural aspects. Same as on the stage, the costumes become collages of different pieces and create a nonrealistic universe. One can find, for example, influences of Samurai warriors, the high waist dresses from Gogol times and parts of Cossack clothing.”
The creators also note that “The Terrible Revenge” is a story with an open end so the spectators may find their answers to eternal questions.