To the Secretary General

of the North Atlantic Treaty Organization

We, the members of the Association of Opera Theatres of Ukraine and the general directors-artistic directors of Kyiv, Kharkiv, Odesa, Lviv and Dnipro national musical, opera and ballet theatres on behalf of theatre companies, appeal to the North Atlantic Treaty Organization with the following:

Vladimir Putin’s decision to invade Ukraine has led to mass destruction and high civilian casualties. Despite the heroic resistance of the Armed Forces of Ukraine and the citizens of Ukraine to the Russian invaders, russian fascist army continues to attack cities with high concentrations of civilians, including children. The Russian horde is bombing and shelling residential houses, civilian bomb shelters, hospitals, maternity hospitals, cultural and government institutions as well as nuclear power plants, which could lead to the global catastrophe.

More than three million Ukrainians have been forced to flee their homes or country to escape the brutality of russian war. Thousands of civilians in Ukraine have already died from the aggressive actions of the Russian army, including more than 14,000 killed since Putin’s first aggression in Donbas since 2014.

Ukraine is in danger of a serious humanitarian catastrophe; Europe and the whole world faces its consequences. Introduction of the no-fly zone and the protection of the Ukrainian sky by the United States and NATO for the defence of Ukraine are desperately needed.

The international community has responded to the Kremlin’s aggression with unprecedented sanctions and the supply of lethal weapons to Ukraine to defend our territory and prevent war in Europe. But more decisive actions and steps are needed to stop this bloody war.

That is why we the undersigned general managers of the Ukrainian opera theatres, on behalf of more than 4,000 staff, hereby appeal to President Biden administration, together with NATO allies for imposing a no-fly zone over Ukraine.

P. Chupryna, General Manager and Artistic Director of the National Opera of Ukraine 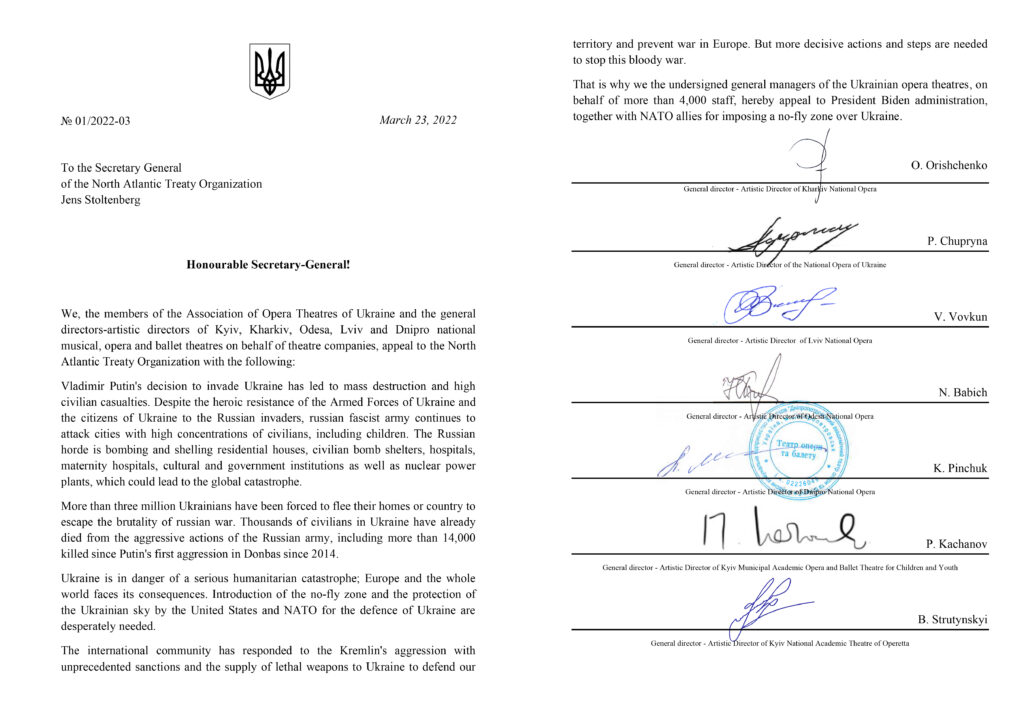 2022-7,8
Home/News/Top news/Letter to NATO by the members of the Association of Opera Theatres of Ukraine and the general directors of musical theatres