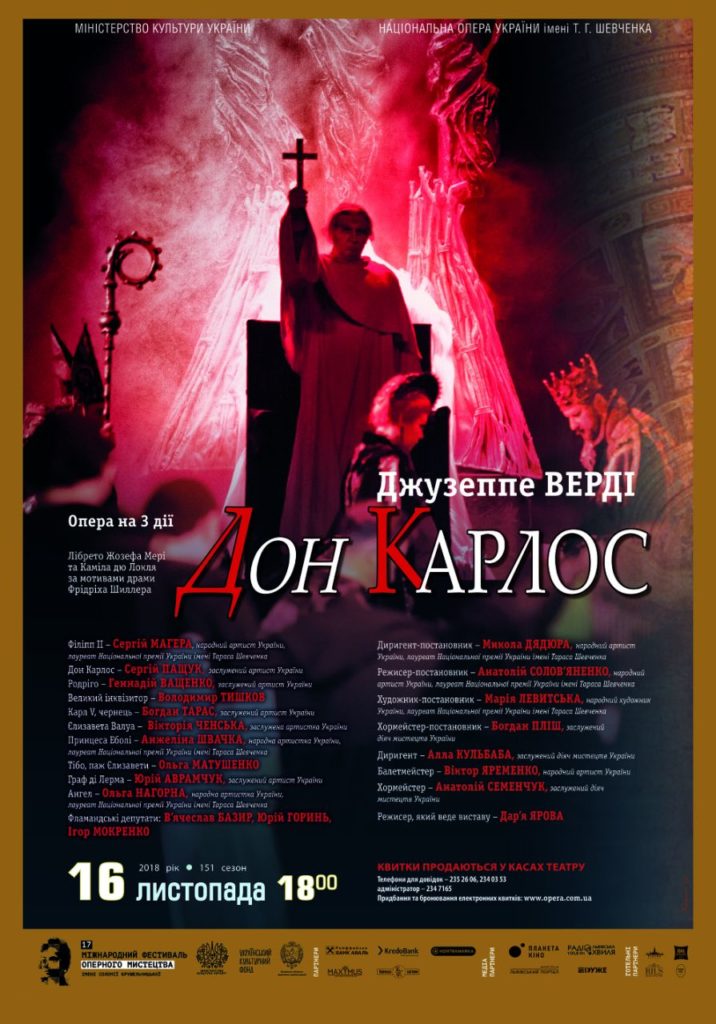 Libretto by J. Mery and C. Du Locle based on F. Schiller’s drama

Laureate of the Taras Shevchenko National Prize of Ukraine

“Don Carlos” is a monumental, sophisticated grand opera by G. Verdi. French version of the opera is staged in Paris, however in Milan and Naples – Italian one. Many theatres prefer Italian version because it is considered to be sanctioned by the author.

Most researchers agree that “Don Carlos” is the greatest work of the composer. In the opera author combines his liberal humanist worldview and popular opera tools such as: traditional arias, duets, bel canto ensembles, and staging methods of Parisian Grand Opera, where the premiere took place in 1867. Fifteen years later Verdi shortened and rewrote the opera, cut act 1 off. He brought it closer to Shiller’s play, which formed the basis of the libretto. In this version, the opera gained great success in many theaters. The production of “Don Carlos” is always spectacular, because the opera is filled with historical images, and music is bright and beautiful.

The scene takes place some time after Philip II and Elisabeth are married. Monks pray for the soul of the former Emperor Charles V. His grandson Don Carlos enters, anguished that the woman he loves is now his stepmother.

A monk resembling Carlo Quinto offers him eventual consolation of peace through God, an early herald of one of the opera’s themes. Carlos greets his great friend Rodrigue, Marquis of Posa, who has just arrived from the oppressed land of Flanders.

Posa asks for the Infante’s aid on behalf of the suffering people there. Carlos reveals that he loves his stepmother. Posa is sympathetic but encourages him to leave Spain and go to Flanders. The two men swear eternal friendship. King Philip and his new wife, with their attendants, enter also to do homage at Charles V’s tomb, while Don Carlos laments his lost love.

Scene 2: A garden near Saint-Just

Princess Eboli sings the Veil Song about a Moorish King and an alluring veiled beauty that turned out to be his neglected wife. Elisabeth enters. Posa gives her a letter from France together, secretly, with a note from Don Carlos. At his urging, Elisabeth agrees to see the Infante alone. Unaware of this relationship, Eboli infers that she, Eboli, is the one Don Carlos loves.

When they are alone, Don Carlos tells Elisabeth that he is miserable, and asks her to request Philip to send him to Flanders. She promptly agrees, provoking Carlos to renew his declarations of love, which she piously rejects. Don Carlos exits in a frenzy, shouting that he must be under a curse. The King enters and becomes angry because the Queen is alone and unattended. He orders the lady-in-waiting who was meant to be attending her, the Countess of Aremberg, to return to France, prompting Elizabeth to sing a sorrowful goodbye-aria. The King approaches Posa, with whose character and activism he is impressed, intent on rewarding him. Posa begs the King to stop oppressing the people of Flanders. The King calls Posa’s idealism unrealistic and warns that the Grand Inquisitor is watching him; Philip nevertheless asks if he can grant Posa another request.

Scene 1: Evening in the Queen’s garden in Madrid

Elisabeth is tired, and wishes to concentrate on the following day’s coronation of the King. To avoid the divertissement planned for the evening, she exchanges masks with Eboli, assuming that thereby her absence will not be noticed, and leaves.

Don Carlos enters, clutching a note suggesting a tryst in the gardens. Although he thinks this is from Elisabeth, it is really from Eboli, to whom he mistakenly declares his love. When Eboli discloses her identity and that she now knows his secret – that he was expecting the Queen – Carlos is horrified. When Posa enters, she threatens to tell the King that Elisabeth and Carlos are lovers. Eboli only just escapes from being stabbed by Posa, on Carlos’s intervention, and exits in a vengeful rage. Just in case, Posa asks Carlos to entrust to him any sensitive political documents that he may have and, when Carlos agrees, they reaffirm their friendship.

Scene 2: In front of the Cathedral of Valladolid

Preparations are being made for an “Auto-da-fé”, the public parade and burning of condemned heretics. While the people celebrate, monks drag the condemned to the woodpile. A royal procession follows, with the King addressing the populace. Don Carlos interrupts it by bringing forward six Flemish envoys, who plead with the King for their country’s freedom. Although the people and the court are sympathetic, the King, supported by the monks, orders the deputies’ arrest. Carlos draws his sword against the King. The King calls for help but the guards will not attack Don Carlos. Posa steps in and takes the sword from Carlos. The King uses it to dub Posa Duke, the woodpile is fired and, as the flames start to rise, a heavenly voice can be heard promising heavenly peace to the condemned souls.

Alone, the King, in a reverie, laments that Elisabeth has never loved him, that his position means that he has to be eternally vigilant and – returning to a central theme – that he will only sleep properly when he is in his tomb in the Escorial. The blind, ninety-year-old Grand Inquisitor is announced and shuffles into Philip’s apartment. When the King asks if the Church will object to him putting his own son to death, the Inquisitor replies that the King will be in good company: God sacrificed His own son. In return for his support, the Inquisitor demands that the King have Posa killed. The King refuses to kill his friend, whom he admires and likes, objecting to such wanton cruelty. However, the old monk reminds Philip that the Inquisition can take down any king; he has created and destroyed other rulers before. Somewhat taken aback, the King suggests the Grand Inquisitor forget about the past discussion. The latter replies – perhaps! – and leaves. In a moment of continuing high drama, Elisabeth enters, alarmed at the apparent theft of her jewel casket. However, the King produces it and points to the portrait of Don Carlos which it contains, accusing her of adultery. She protests her innocence but, when the King threatens her, she faints. In response to his calls for help, into the chamber come Eboli and Posa. Their laments of suspicion cause the King to realise that he has wronged his wife. Posa then resolves to save Carlos, though it may mean his own death. Eboli feels remorse for betraying Elisabeth; the latter, recovering, expresses her despair.

Elisabeth and Eboli are left together.

Eboli confesses that not only did she steal the casket because she loved Carlos and that he had rejected her, but also because she has been the King’s mistress. Elisabeth takes this in her stride and tells Eboli that she must go into exile or enter a convent. After she exits, Eboli curses the fatal pride that her beauty has bestowed on her, chooses the convent over exile and resolves to try and save Carlos from the Inquisition.

Don Carlos has been imprisoned. Posa arrives to tell him that he will be saved but that he himself will have to die, incriminated by the politically sensitive documents which he had asked Carlos to entrust to him. A shadowy figure appears and shoots Posa in the chest. As he dies, Posa tells Carlos that Elisabeth will meet him at Saint-Just the following day. He adds that he is content to die if his friend can save Flanders and rule over a happier Spain. At that moment, Philip enters, offering his son freedom. Carlos repulses him for having murdered Posa. The King has not noticed that Posa is dead and cries out in sorrow.

Bells ring as Elisabeth, Eboli and the Grand Inquisitor arrive. The crowd threatens the King, demanding the release of Carlos and, in the confusion, Eboli escapes with Carlos. Although the people are brave enough in the presence of the King, they are terrified by the Grand Inquisitor, instantly submitting to his angry command to quieten down and pay homage to Philip.

Scene 3: The moonlit monastery of Yuste

Elisabeth kneels before the tomb of Charles V. She is committed to help Don Carlos on his way to fulfill his destiny in Flanders, but she herself longs only for death. Carlos appears and they say a final farewell, promising to meet again in Heaven.

Philip and the Grand Inquisitor enter. The King has submitted to the church’s domination and declares that there will be a double sacrifice: Posa and Carlos. The Inquisitor confirms that the Inquisition will do its duty. A short summary trial follows, confirming Carlos’s putative culpability.

Carlos, calling on God, draws his sword to defend himself against the Inquisitor’s guards and falls down mortally wounded. Charles V rises from his grave and says that no one can rest except in Heaven.