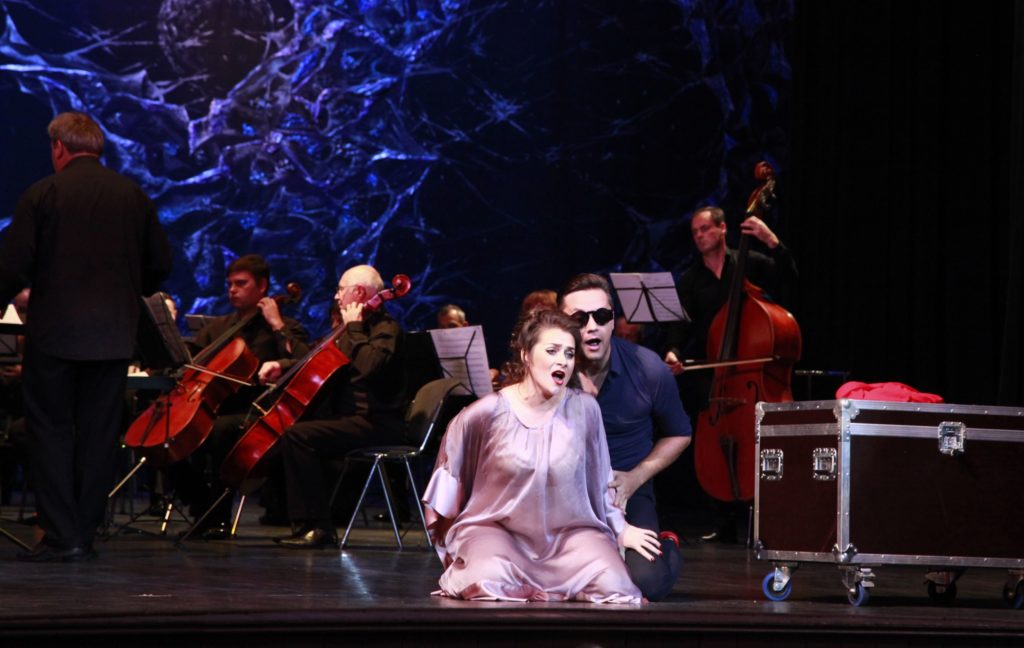 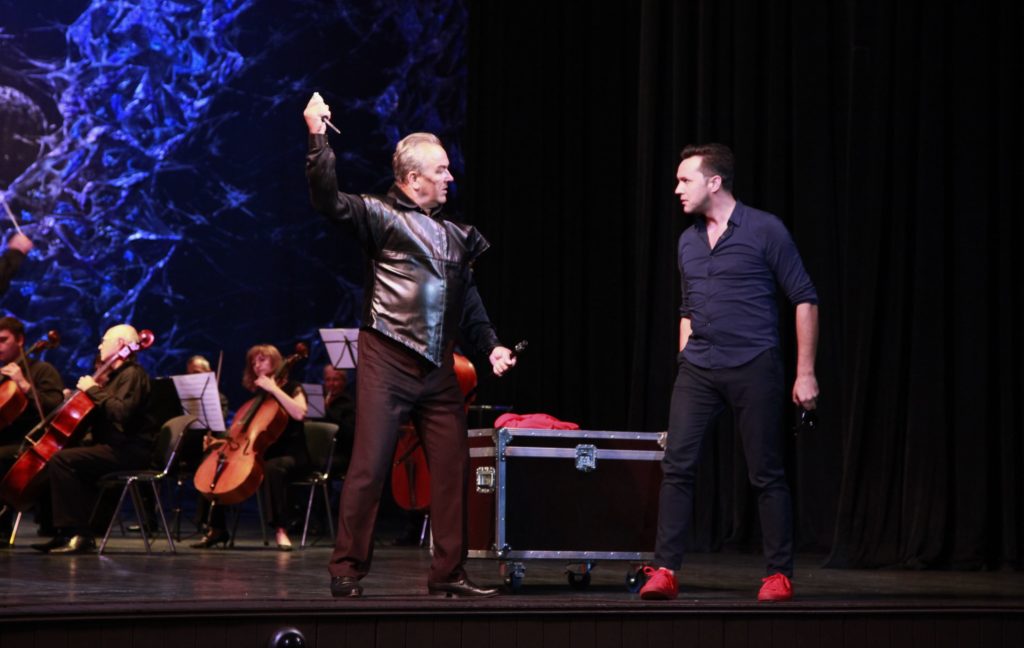 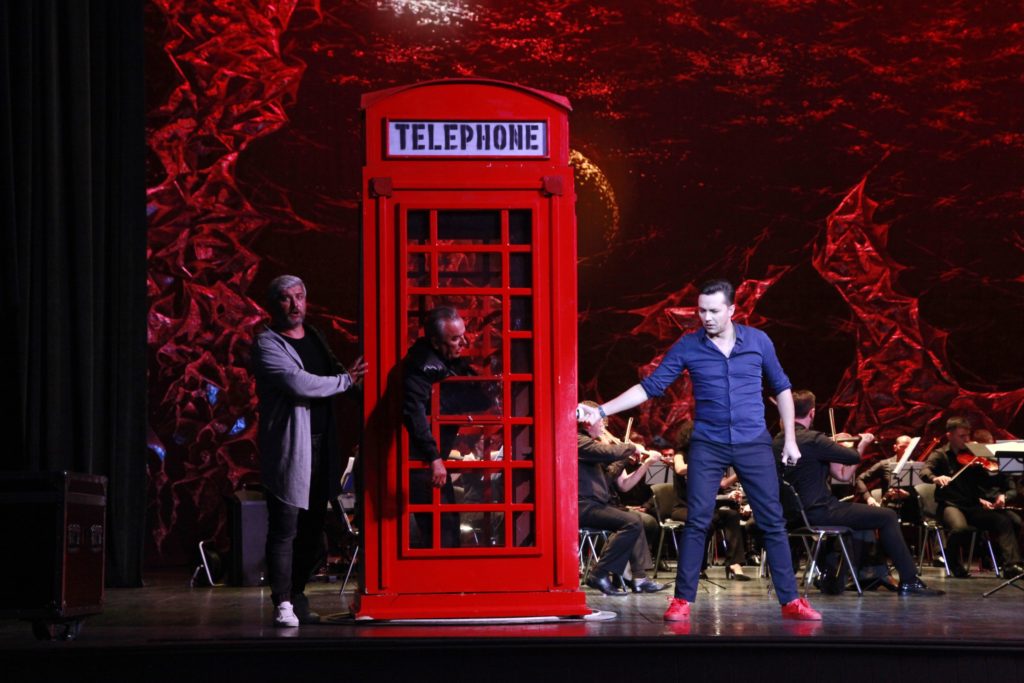 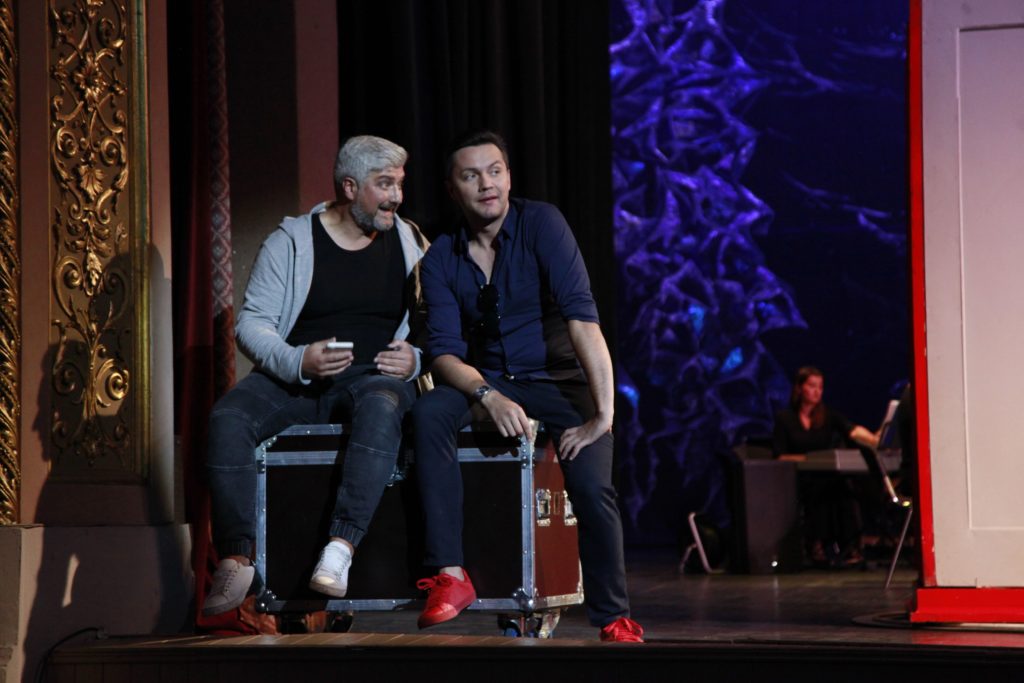 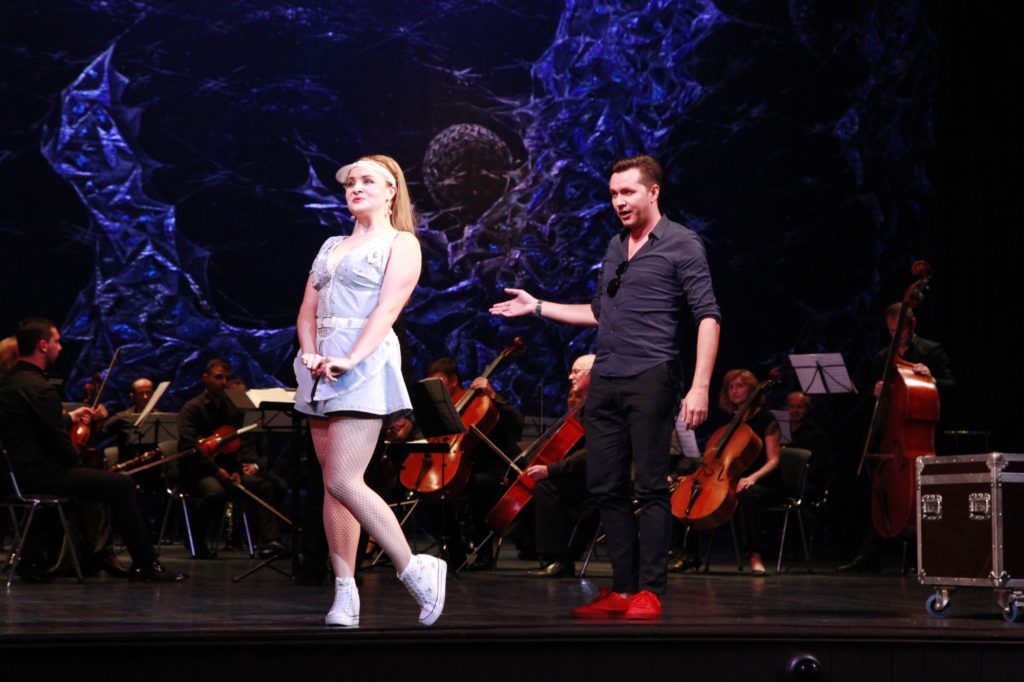 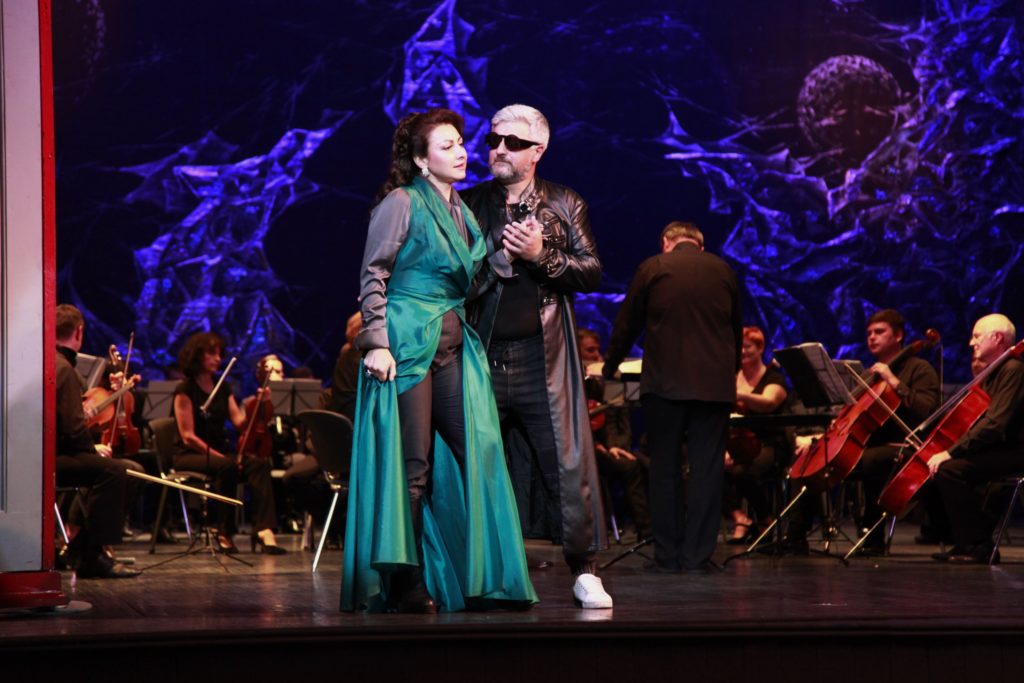 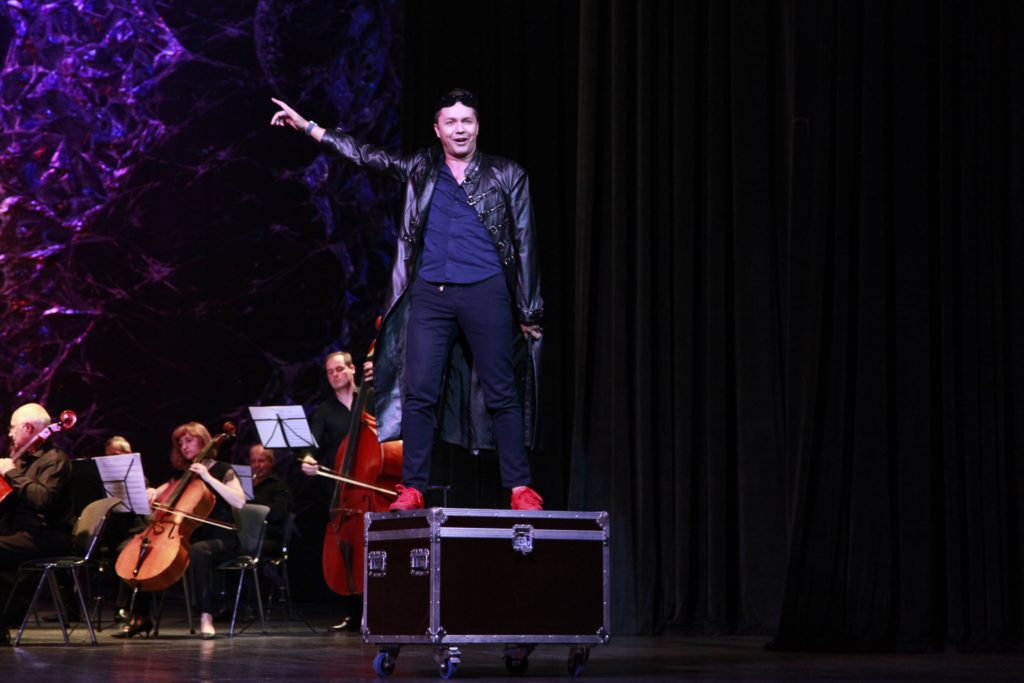 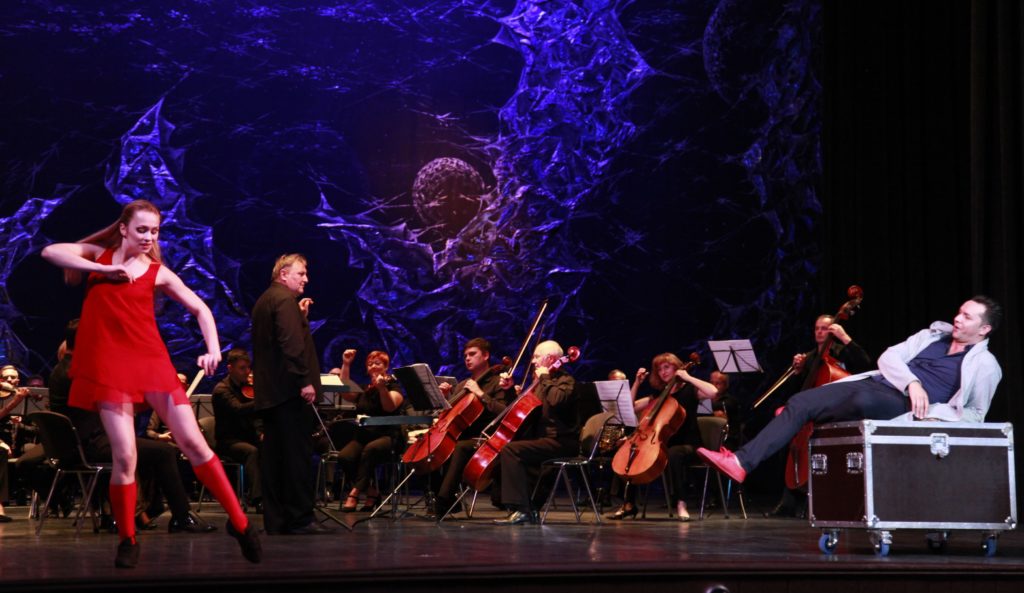 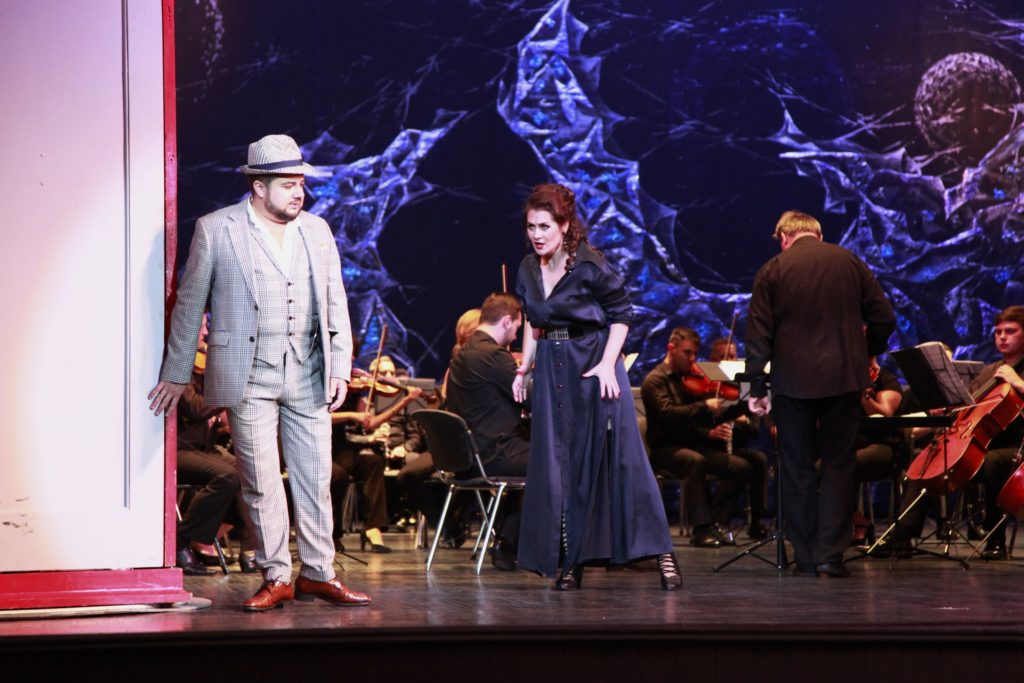 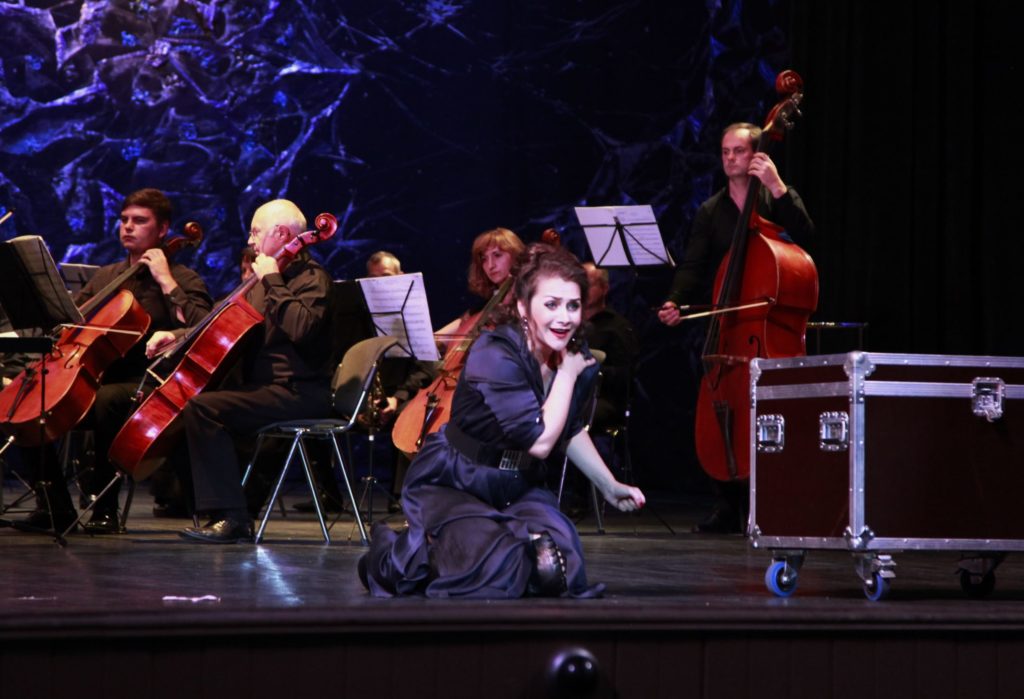 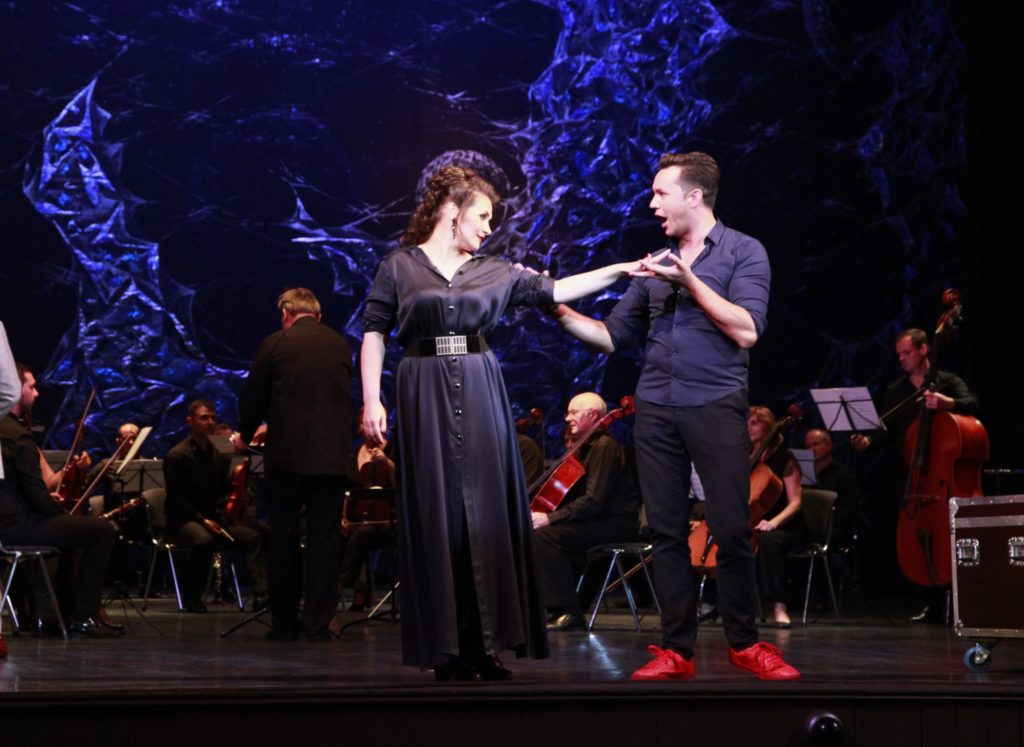 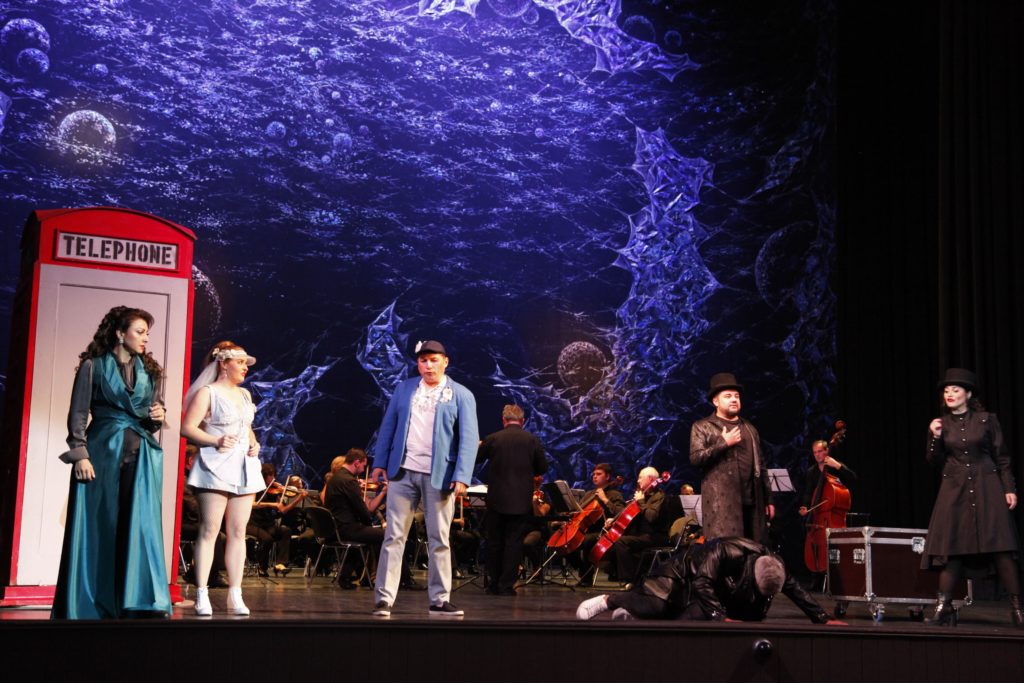 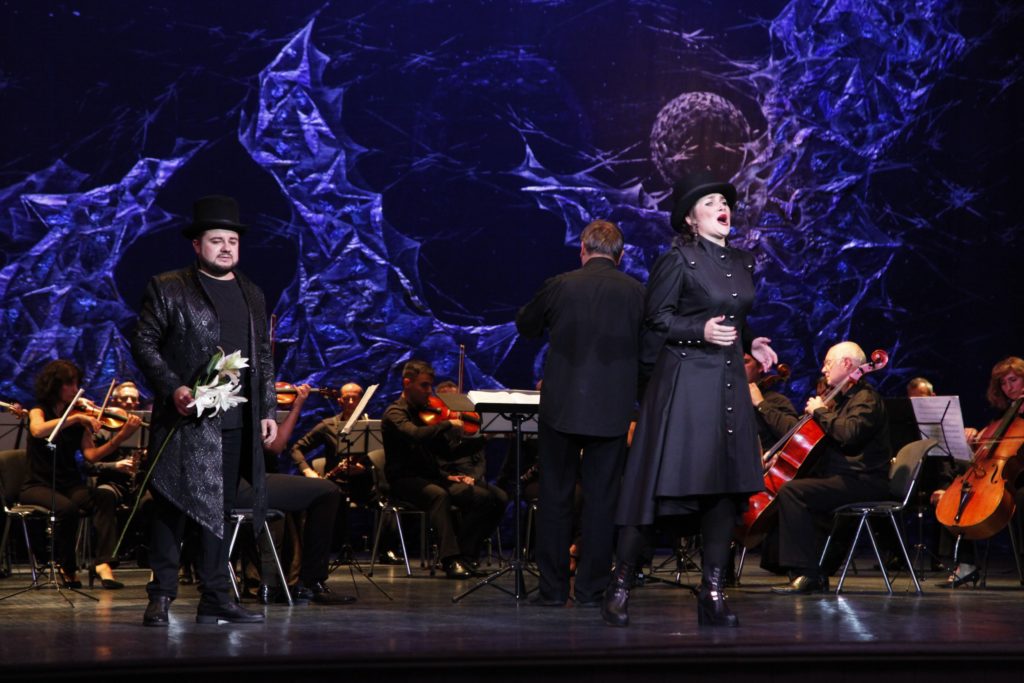 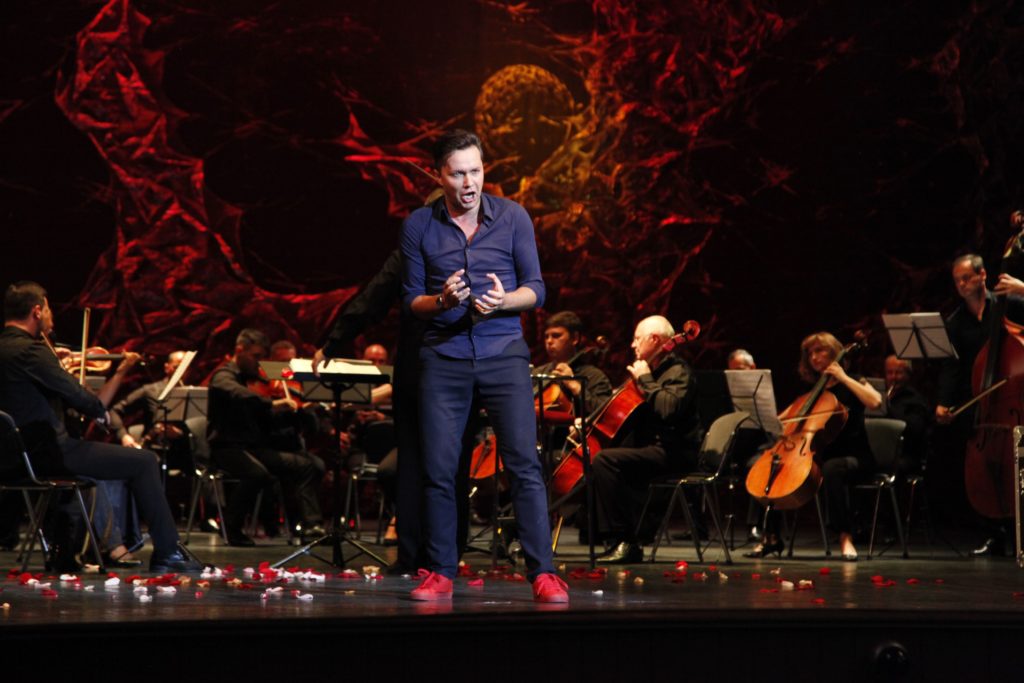 For more than two centuries, the opera “Don Giovanni” retains its popularity as one of the most famous compositions of W.A. Mozart. We invite you to enjoy popular arias and wonderful music of the famous Mozart in a concert performance of his opera.

During the concert performance, the artists and orchestra are positioned on the stage keeping social distancing.  The concert is presented without intermission.

The opera is performed in Italian with Ukrainian subtitles.

The night in Seville. Leporello, servant to the nobleman Don Giovanni, keeps watch outside the Commendatore’s home at night.  He grumbles about his demanding master, because he has to suffer various inconveniences while his master, Don Giovanni, attempts to creep into the bedroom of Donna Anna, his former mistress. How long Leporello has to wait for him?

Don Giovanni runs out of the house, followed by frightened and indignant Donna Anna. She calls her father for help. The Commendatore challenges Giovanni to a duel and is killed. Giovanni and Leporello escape. Donna Anna realises with horror that her father is dead. Don Ottavio, the fiancé of Donna Anna, appears. Anna asks him to avenge her father’s death.

Leporello reproached Don Giovanni that he is leading a rotten life. However, Don Giovanni is captured by thoughts about new date with beautiful stranger. But, this woman turns out to be his former mistress, Donna Elvira.  She still loves him and looks for him everywhere. The two recognize each other and she reproaches him bitterly. Don Giovanni succeeds in escaping again and pushes her on Leporello.

To comfort betrayed woman, Leporello tells her she is neither the first nor the last of his master’s victims and shows her his catalogue with the name of every woman Giovanni has seduced.

Don Giovanni and Leporello visit wedding in the village.  Don Giovanni is attracted by lovely Zerlina at first sight. Don Giovanni devises a plan and attempts to relax the vigilance of jealous bridegroom, Masetto, by offering to host a wedding celebration at his castle and promises Zerlina to marry her.

Donna Elvira arrives and thwarts the seduction. She warns Zerlina of the treachery of this nobleman and leaves with her.

Don Ottavio and Donna Anna enter, plotting vengeance on the still unknown murderer of Donna Anna’s father. Donna Anna, unaware that she is speaking to her attacker, pleads for Don Giovanni’s help.

Donna Anna suddenly recognizes him as her father’s murderer and tells Don Ottavio the story of his intrusion. Don Ottavio swears to avenge.

Don Giovanni eagerly listens to Leporello about the events in the castle: how he entertained all the guests together with Mazetto; how he met Zerlina and Donna Elvira; how he locked the woman in her room, taking the key with him. Don Giovanni praises his witty servant.

At the castle, Zerlina follows the jealous Masetto and tries to pacify him. She manages to persuade him of her innocence.

Three masked guests – the disguised Don Ottavio, Donna Anna, and Donna Elvira – enter the garden. They have come to the castle to prove Don Giovanni guilty. Meanwhile Don Giovanni leads Zerlina to a private room and tries to assault her. When Zerlina screams for help, Don Giovanni drags Leporello onstage from the room, accuses him of assaulting Zerlina, and threatens to kill him. The others are not fooled.  Denounced and menaced from all sides, Don Giovanni remains calm and escapes.

Before Don Giovanni can complete his seduction of the maid, Masetto and his friends arrive, looking for Don Giovanni in order to avenge him. Don Giovanni in the cloak of Leporello takes Masetto’s weapons away, beats him up, and runs off, laughing. Zerlina arrives and consoles the bruised and battered Masetto.

Cemetery in Seville. Don Giovanni and Leporello are hiding. Among the graves and tombs they discuss their latest adventures. Standing in front of the monument to Commendatore,  Leporello reads the inscription upon the statue’s base: “Here am I waiting for revenge against the scoundrel who killed me”.  Don Giovanni bravely invites the statue for a dinner. Much to his surprise, the statue nods its head and responds affirmatively.

Don Giovanni dines. Donna Elvira comes and once again tries to turn her treacherous lover to the path of the righteous. However, he does not want to listen to her. Hurt and angry, Donna Elvira gives up and leaves. Offstage, she screams in sudden terror. Don Giovanni orders Leporello to see what has happened; when he goes, he also cries out, and runs back into the room, stammering that the statue has appeared as promised. Don Giovanni is fearlessly facing his death. The statue offers a last chance to repent, but Don Giovanni adamantly refuses.

Thunder and lightning light the sky up.  Don Giovanni bravely offers his hand to Commendanore.  The statue drags the offender into a deadly abyss.

The medieval Spanish legend about the punished libertine and the seducer Don Giovanni is one of the most popular plots in the history of the world theater. It formed the basis of many theatrical performances – dramatic, music, folk, puppet and choreographic. When Mozart composed his masterpiece there had already been several operas with the same plot in Italy.

The story of Don Giovanni gave Mozart the reason for raising the problem of a personality. His Don Giovanni personifies reckless courage, boundless energy, great optimism and love for life. It is cheerfulness that keeps the main secret of the hero’s charm. However, his egoism, violation of laws of honor and morality are the source of misfortune for everyone who Don Giovanni meets in his path. The composer emphasized the duality and contradictory of Don Giovanni. He is not only a punished libertine, as majority of compositions present him, but also a strong personality who lives by his own laws.