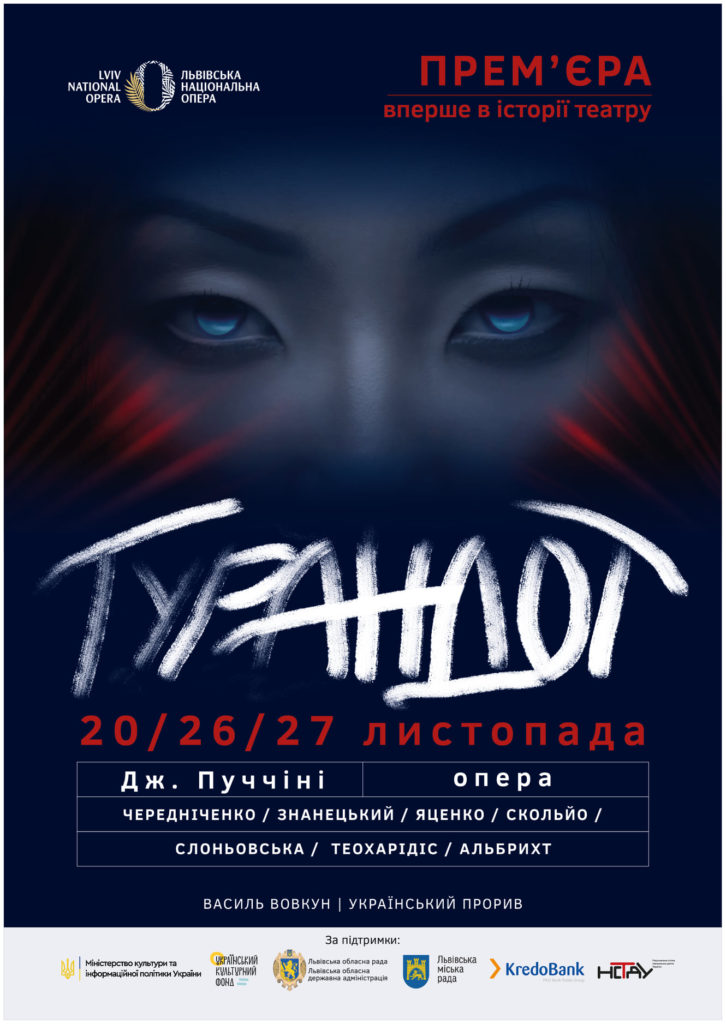 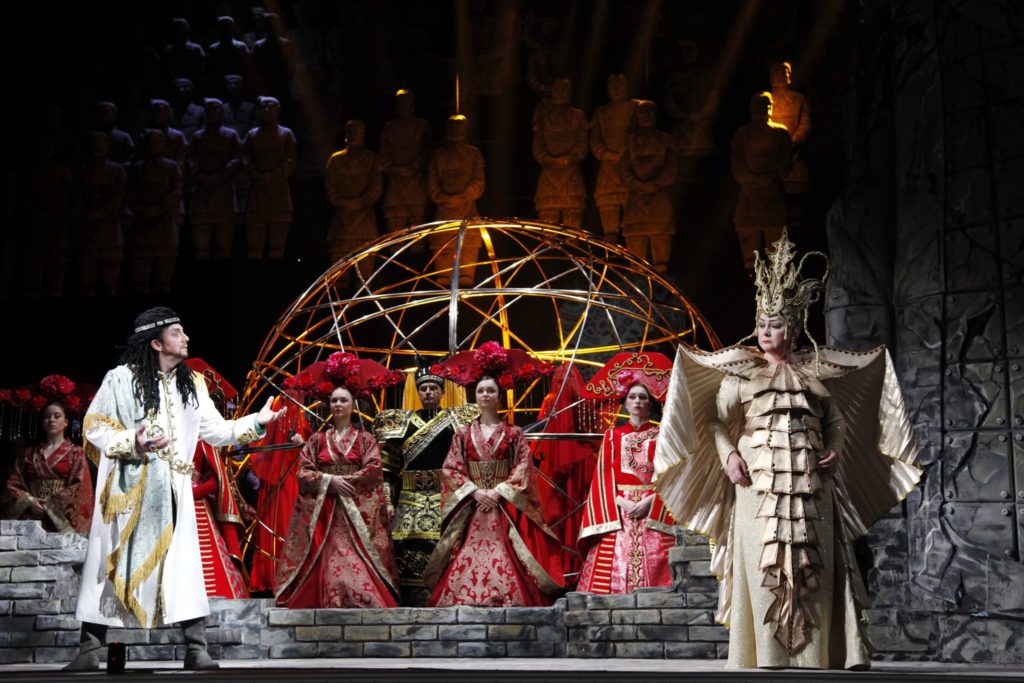 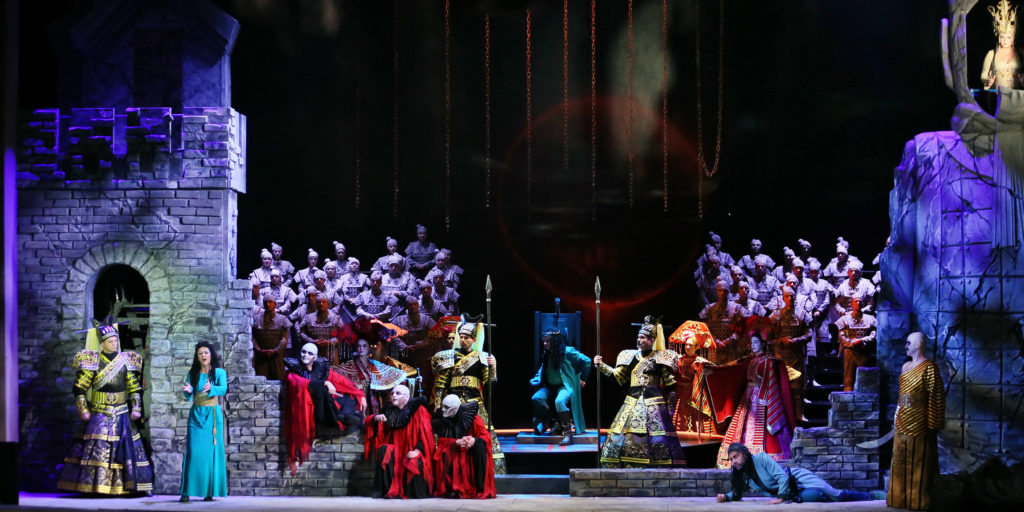 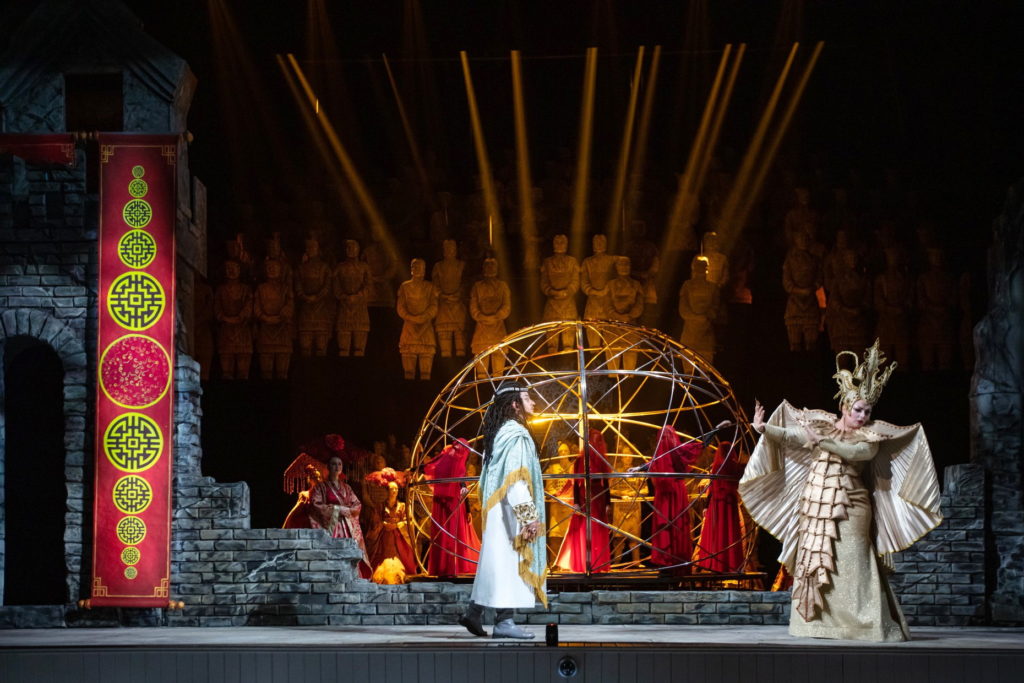 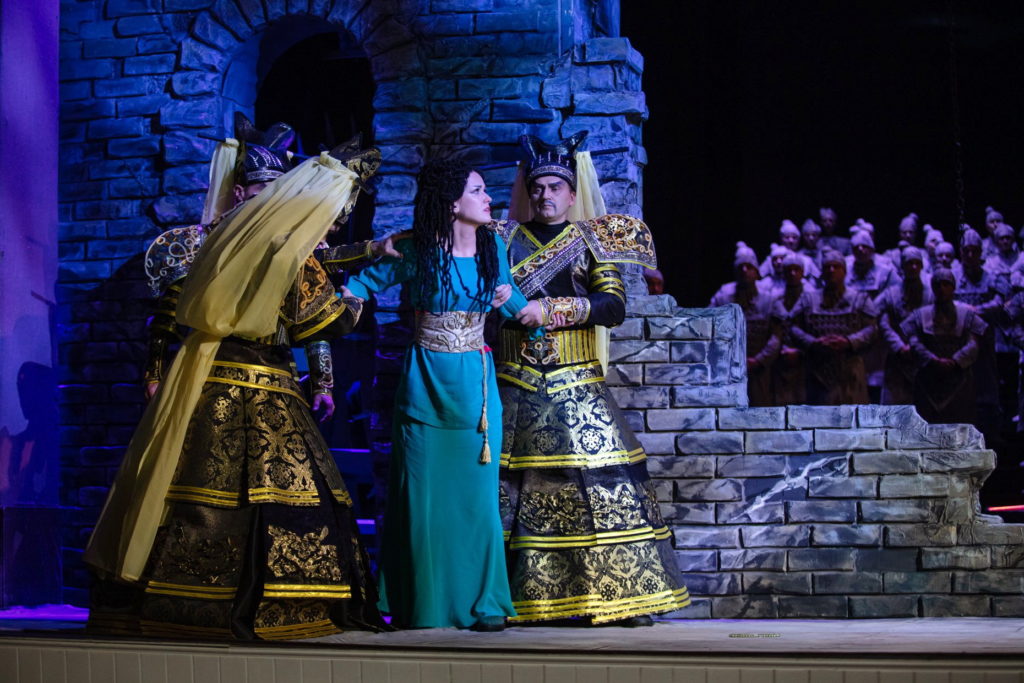 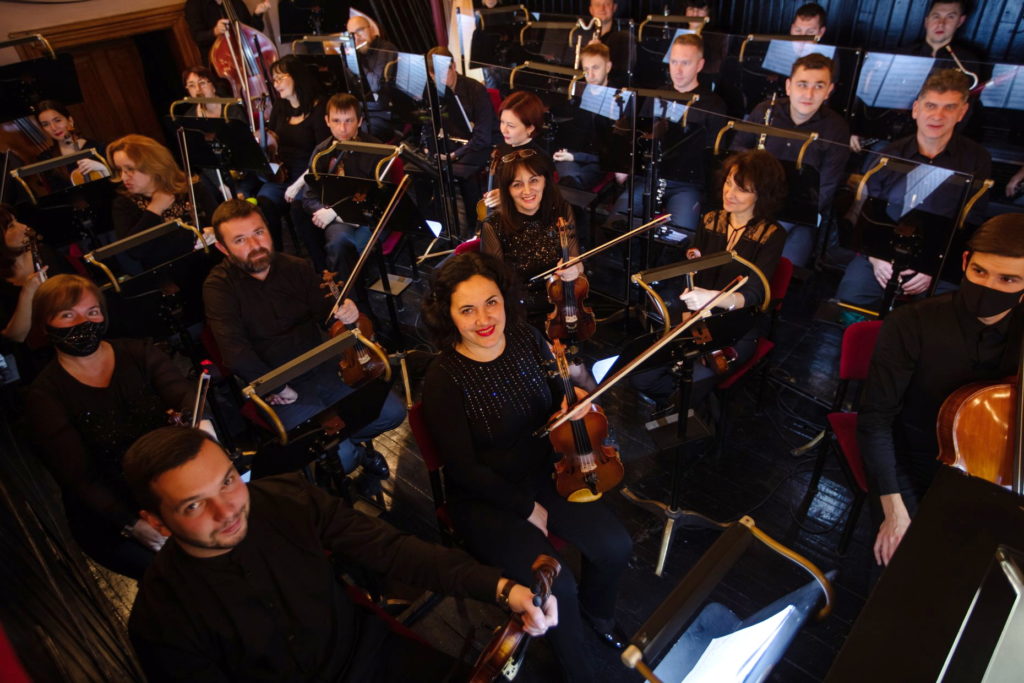 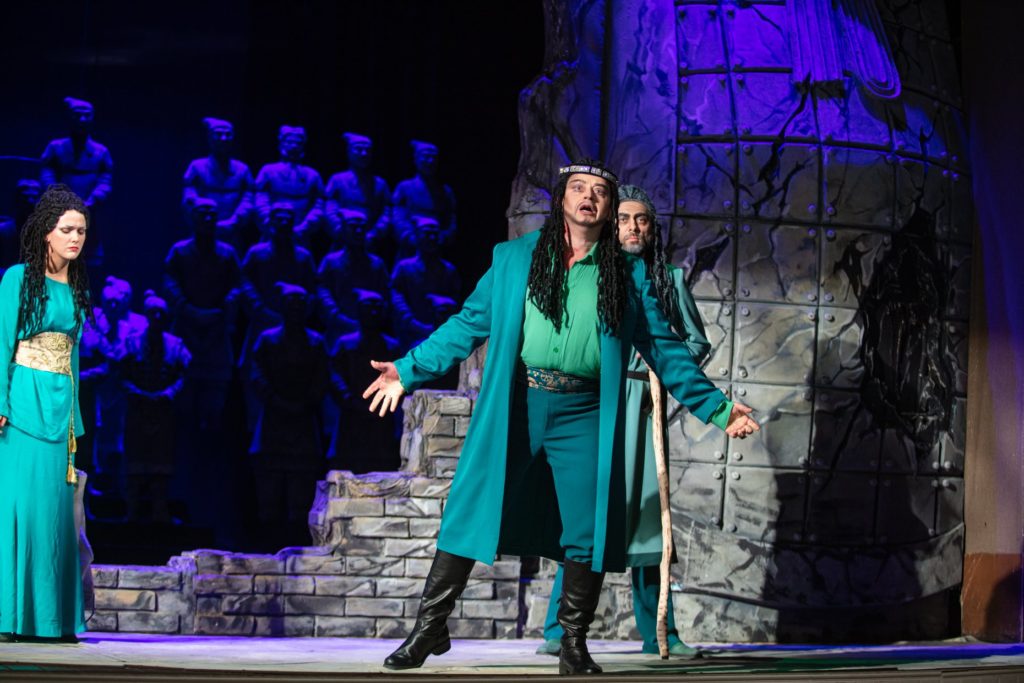 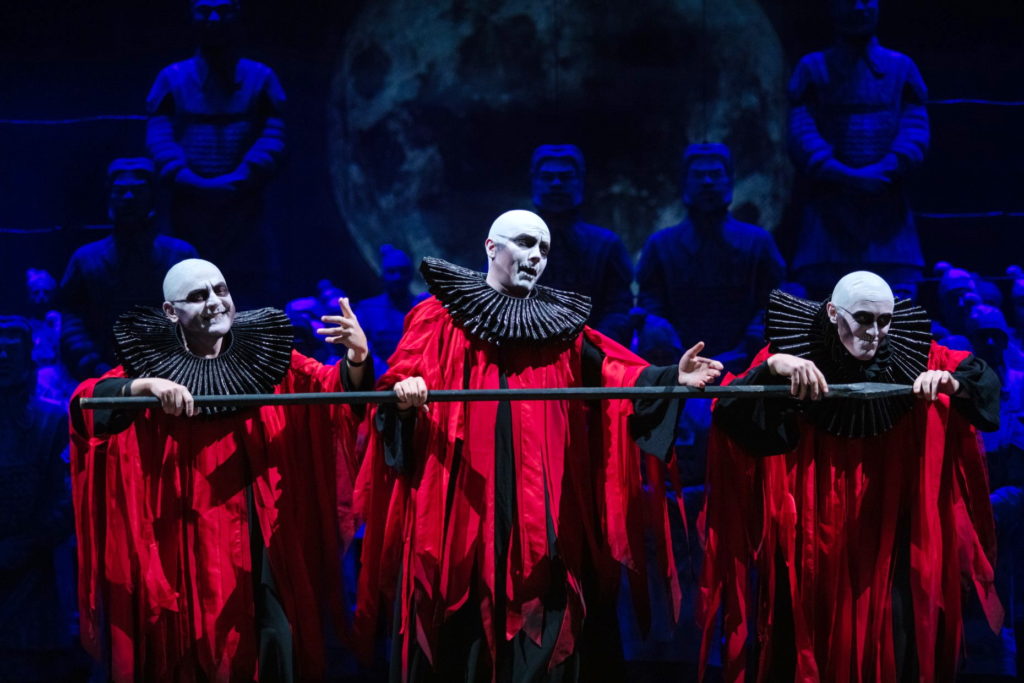 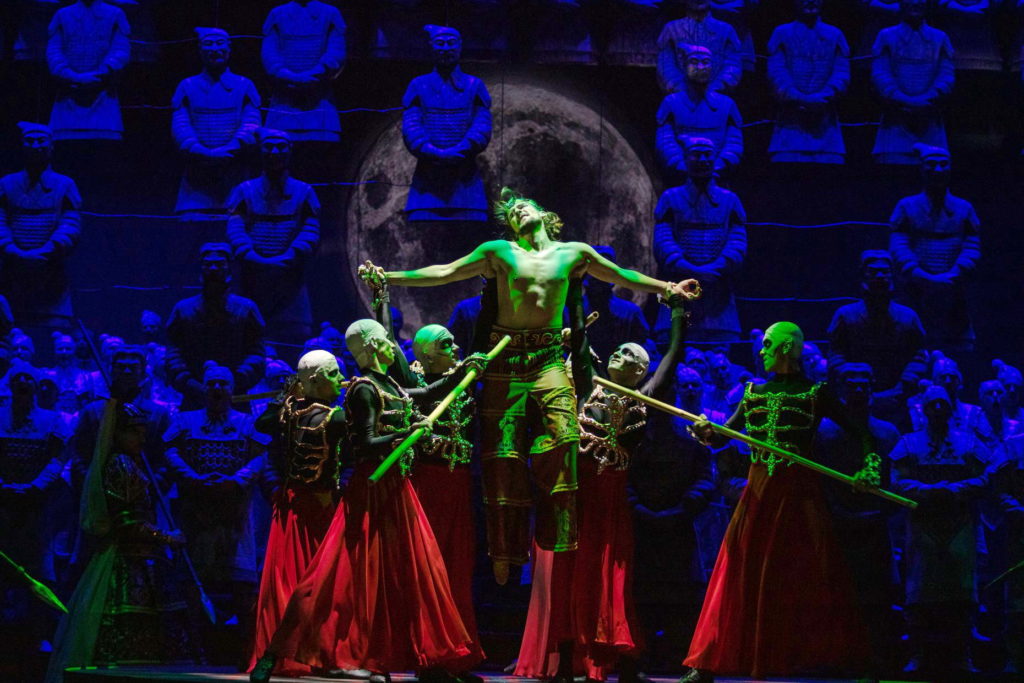 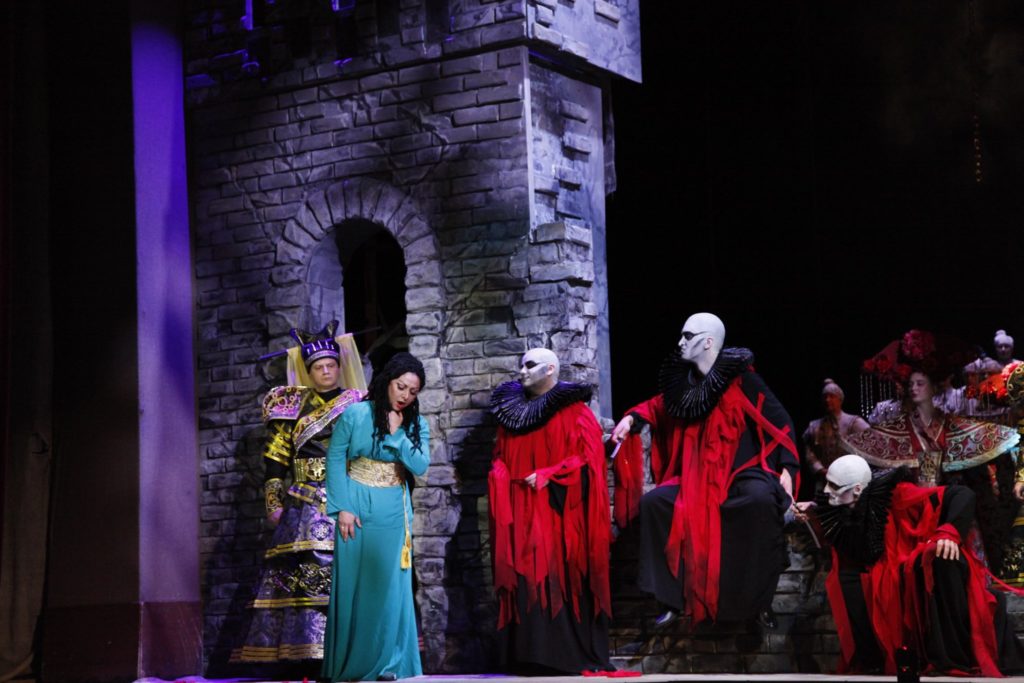 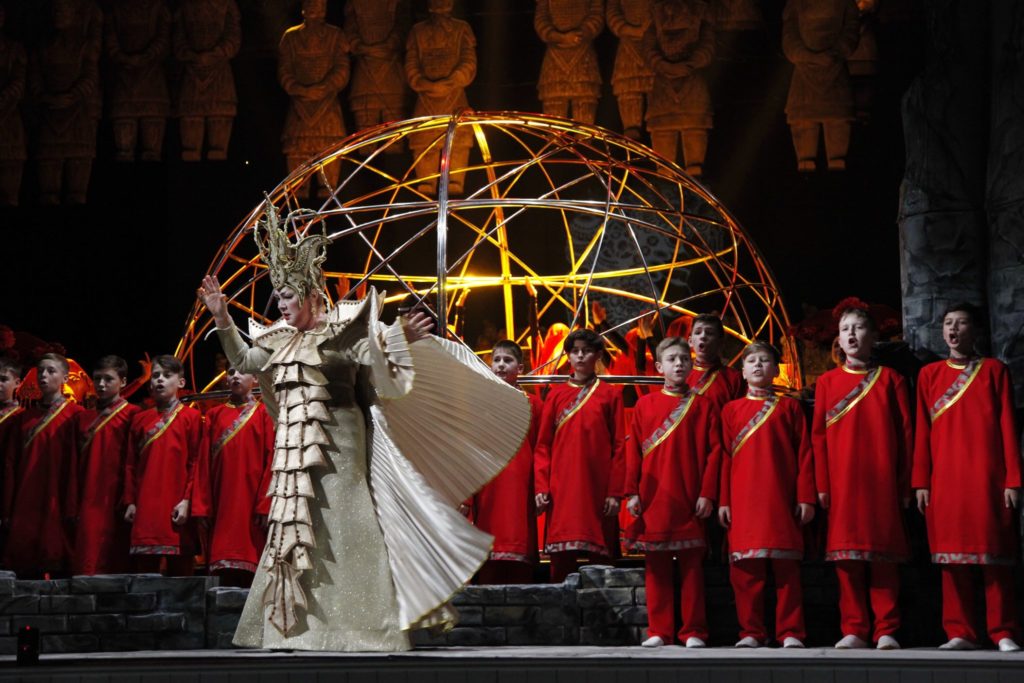 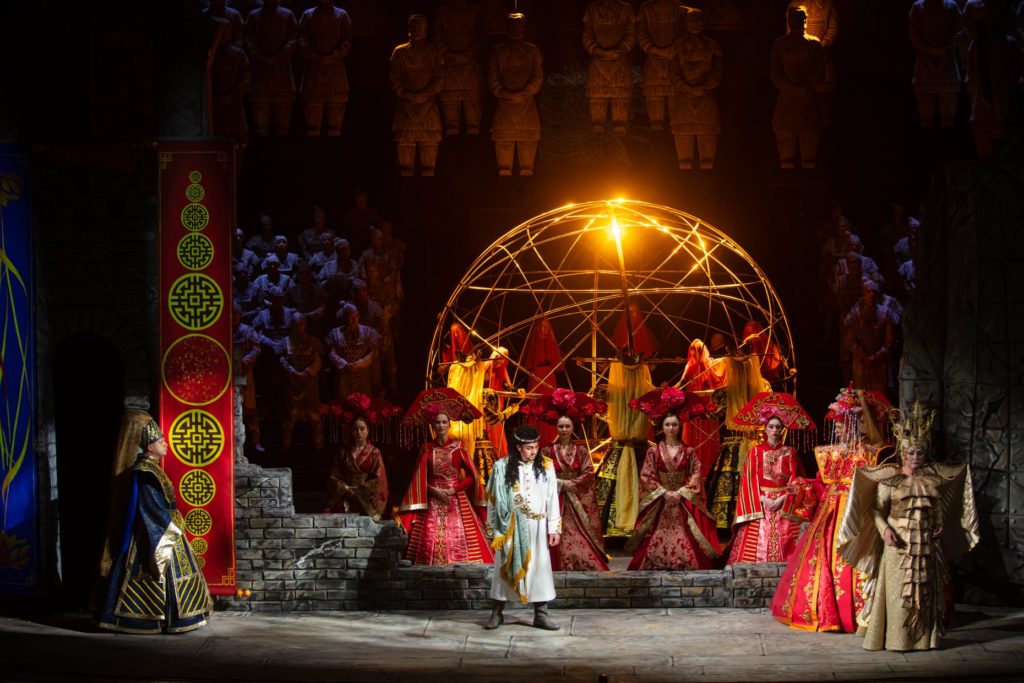 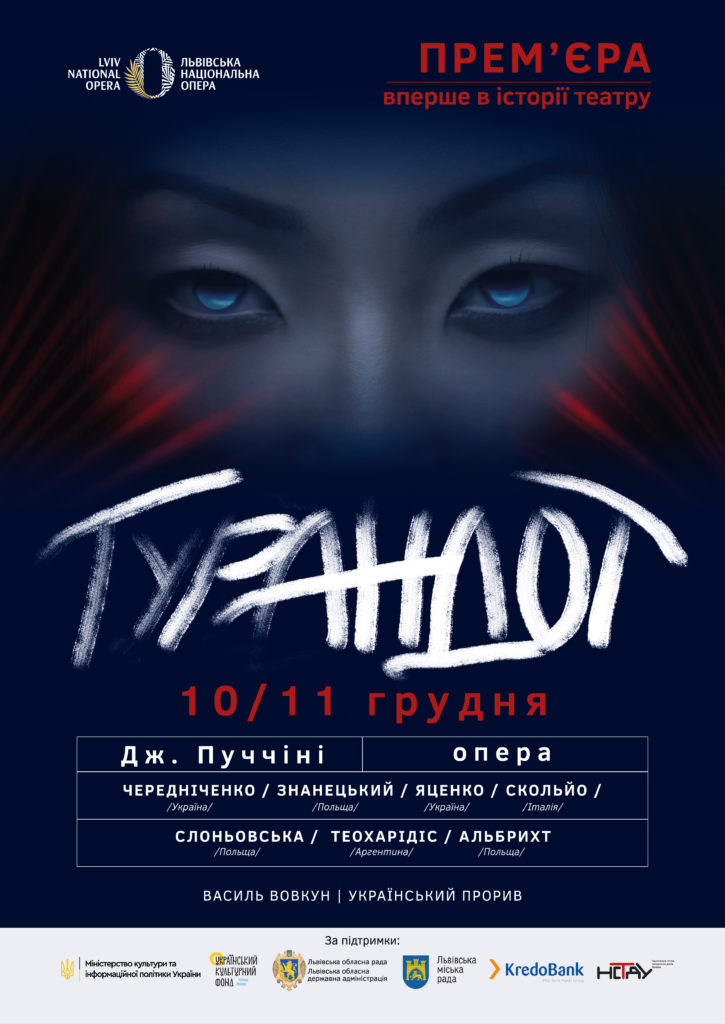 Dedicating to the 120thanniversary of the theatre, Lviv National Opera presents the opera “Turandot” by Giacomo Puccini, staged for the first time in our theatre.

Colourful set design brings the audience to ancient China, when the Great Wall of China was built and the legendary terracotta army was created to protect the empire both in the real and unreal worlds. However, sacrificial death in the name of love can touch even ancient stone.

The opera is performed in Italian with Ukrainian subtitles. 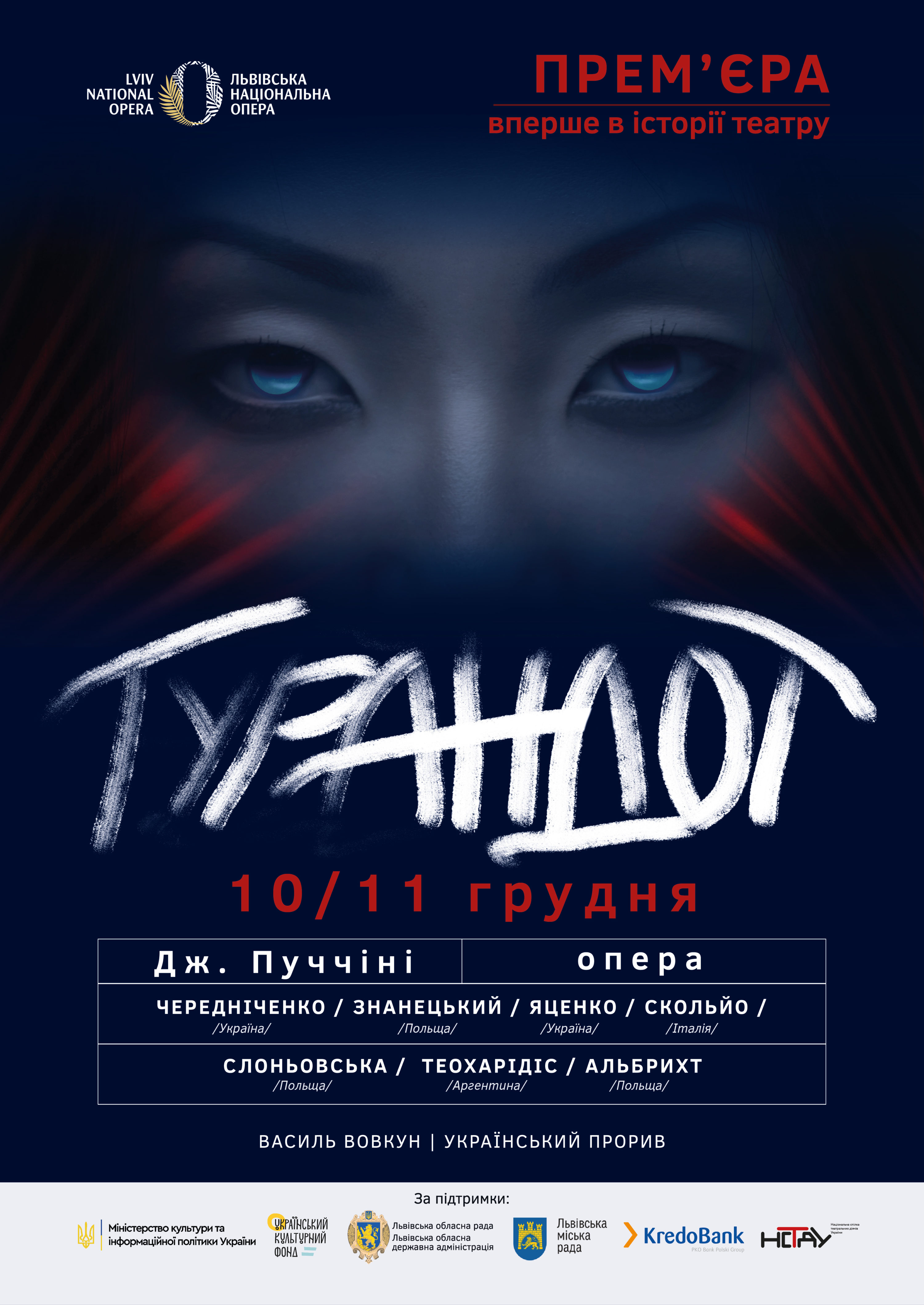 The imperial city of Peking lies in darkness. The square near the palace is overcrowded. A Mandarin reads an imperial edict: the Emperor’s daughter Princess Turandot will marry any prince who solves three riddles. If he makes a mistake, he will be executed. The executioner’s sword awaits the young Persian prince, who failed to solve the riddles of Turandot. When the moon rises, his head will fall.

An old weak man is among the onlookers. This is Tatar king Timur, who was defeated and lost his state. His faithful slave Liu supports him. The crowd almost crushes them, but a young man comes to the rescue. This is Prince Calaf, the long-lost son of Timur. Liu is happy, because she loves Prince hopelessly, who has once smiled at her.

The crowd waits for the moon to rise, the time of execution. But people, who have recently sought to see the murder of the young prince, beg for mercy. Calaf curses the cruelty of Turandot, but at the very moment she appears in her palace her beauty blinds him, and Prince loses his peace of mind. Timur begs his son to suppress passion and avoid death. Three masked imperial ministers – Ping, Pong and Pang are joking about the temptations of life and warn the stranger against imminent death. Calaf becomes absolutely determined to solve the riddles and to win the love of Turandot. He strikes the gong thrice – this is the point of no return.

Ping, Pong and Pang wait for a new day to find out what they have to prepare: a wedding or a funeral? Peace has been shattered in ancient China since Turandot was born: every year more and more foreign princes are executed. Thoughts of imperial ministers wander to their country homes, forests and gardens in the picturesque regions of China.

Ping, Pong and Pang praise the love that can establish peace in the empire, and they hope that the days when a woman who denied love will pass forever. The Ministers, as well as the huge crowd of Peking, wait for another execution.

The Chinese Emperor Altoum, the divine Son of Heaven sits on his grand throne in his palace, surrounded by sages, mandarins and ministers. The Tatar Prince Calaf appears, but nobody knows his name. He asks the Emperor thrice to begin the trial. Turandot recounts the story of her beautiful ancestor who was abducted by a conquering prince. As a representative of the dynasty, Turandot has turned against men and is determined that no stranger, whom she despises, shall ever possess her.

Finally, Turandot presents three riddles which unrecognized Prince solves. The Princess is embarrassed, she begs the Emperor not to give her to a stranger, but her father reminds her of the sacred oath. Seeing horror and disgust of Turandot, the Prince offers his own riddle: if Turandot can learn his name before sunrise, at dawn, he will die and Turandot will be free. The Princess agrees. The crowd praises the Emperor.

This night, none is sleeping in Peking. On the pain of death, Turandot ordered to discover the name of Prince by morning. Only when she learns the Prince’s name, she will be free.

Ping, Pong and Pang meet the Prince in the Imperial garden. They offer him the most beautiful women, wealth and fame if he reveals the secret. This will save Peking and its citizens from suffering. But the Prince dreams only about Turandot.

Soldiers drag in Timur and Liu. It was they who spoke with the Prince. If they do not tell Turandot the name of Prince, they will die. Defending Timur, Liù replies that she alone knows the stranger’s identity and will never reveal it. Turandot condemns the slave to torture, but Liu tells the Princess about the power of love. This feeling is so strong that torment becomes a pleasure, the highest sacrifice in the name of love. With her silence, Liu wins a victory over Turandot.

Suddenly Liu snatches a dagger from a soldier and kills herself. Liu loved Prince sincerely because once he smiled at her. Since then neither time nor trials could challenge her love. Everyone is impressed by the death of the slave who sacrifices herself for love.

To celebrate the 120th anniversary, Lviv National Opera presents the last opera of the famous Italian composer Giacomo Puccini “Turandot”, the first staging in the history of the theatre as well as of the city in general.

The operas “Manon Lescaut”, “La boheme”, “Madama Butterfly” and “Tosca” brought Giacomo Puccini world fame of an exceptional lyricist who subtly embodied the psychological shades of his characters, and in particular, the main characters – gentle, enamoured, fragile and courageous women.

During the composer’s lifetime, his operas were performed at the world’s leading theatres, and the elegant handsome composer, who was fond of cars, achieved great popularity. In his operas, he always stuck to the principle: the most important thing in an opera is the beautiful melody, sophisticated and fine singing. Puccini rejected music trends of that time – he gave up melodics and tonal harmony. “They used to sing in Italy, but now they don’t!” – Puccini claimed. “Only beats, dissonant chords, false expression, transparency, fluidity, colourlessness.”

In 1918, the composer completed three one-act operas – Il trittico – “Suor Angelica”, “Il tabarro” and “Gianni Schicchi”, and he was looking for a plot for a new opera. He admired the play, which was popular at the German theatres – “Turandot” by Friedrich Schiller, directed by Max Reinhardt. On the Italian stage the tragicomic tale about the Chinese Princess was presented by the playwright Carlo Gozzi, who turned to the sources of the 12th century – the story of the Azerbaijani poet Nizami. The composer mentions this in his letter of March 1920 to librettist Renato Simoni and adds:

“Dear Simony, I have read “Turandot”.

For my part, I would advise that we seize upon this subject. To simplify it by reducing the number of acts and to strive to make it slim and workable, and above all to intensify the amorous passion of Turandot, that for so long has shouldered beneath the ashes of her great pride…” (Giacomo Puccini, letter to Renato Simony, March 18, 1920).

Since then the composer began his effective cooperation on the libretto with Giuseppe Adami, who worked with Puccini on his previous operas – “La rondine” and “Il tabarro”, and the famous playwright and critic Renato Simoni. Unfortunately, due to the busyness of librettists on other projects, the work was too slow, what the composer complained about it in many letters:

“My desire, I would say – almost suffering from idling and the striving for work on the tyrannical Princess – Is growing every day. I remember it was August when we talked about the script! And in twenty days it’s Christmas! … I do not reproach you, but if my words had rowels, then you, my thoroughbred horse, would feel that your sides are pierced with spurs” (Giacomo Puccini, letter to Renato Simony, December 4, 1920).

To a bitter disappointment of the composer, who worked with great enthusiasm on the libretto, looking for typical Chinese themes, the work on the opera lasted for four long years. The opera was missing last love duet of Turandot and Calaf, the text of which Puccini constantly rejected:

“But I have wanted it to be a human thing, and when the heart speaks, whether it be in China or Holland, the sense is all the same and the purpose is that of all people” (Giacomo Puccini, letter to Renato Simoni, March 25, 1924).

Puccini tried to finish the opera as soon as possible (the premiere was already scheduled for April 1925), but his health deteriorated, and eventually, in autumn, he needed a throat operation.

“I suffer like Christ on the cross!” (Giacomo Puccini, letter to his friend Angiolino Magrini, November 1924).

To the hospital in Brussels, Puccini took the most valuable things – drafts of the final duet and choir of the opera “Turandot”, which he didn’t manage to complete: the composer did not survive the surgical complications and died on November 29, 1924. The premiere of his last work, “Turandot”, was cancelled.

So the last thing Puccini managed to complete was the scene of the death of the slave Liu, her sacrifice in the name of love for Calaf. Lviv National Opera presents the opera staged by Polish director Michał Znaniecki and conductor Ivan Cherednichenko in the original edition of the composer.

After Puccini’s death, a student of the composer, Franco Alfano, decided to complete the opera “Turandot” together with the conductor Arturo Toscanini, who agreed to conduct the premiere at Puccini’s request during his lifetime. A love duet and a happy end were added: at dawn the love for the Unknown Prince was born in Turandot’s heart – there will be no more cruel executions and everyone celebrates the victory of love.

Whether Toscanini was satisfied with the final scene of the opera is still unknown. It is widely known that he had a keen sense of Puccini’s works, and the composer deeply appreciated his conducting and interpretation of his operas. The fact is that during the premiere of the opera “Turandot” at La Scala Theatre in Milan on April 25, 1926, Toscanini lowered his baton and stopped the orchestra at the very note, which was the last one written by Puccini. Opera completed by Alfano with a love duet in the final scene was presented the next day and probably was performed under the baton of another conductor.

So the opera “Turandot” is a mystery – what was the intended drop scene of the opera? Did Liu’s sacrifice and Calaf’s kiss melt the ice of Turandot’s heart? The death of the composer left many secrets about the opera, like the plot of this fairy tale which is filled with riddles.

In the opera, the exotic tunes of mythical China are reproduced by vivid melodies and harmonies, strong orchestral score and large epic choral episodes. They serve as a background for the plot and the characters with their human passions and desires: Prince Calaf, his father Timur and two opposite female characters – cold-hearted and unapproachable Turandot and gentle and obedient slave Liu. Imperial ministers Ping, Pong and Pang, whose characters originate from Italian Commedia dell’arte, are sarcastic and even cruel. The production of “Turandot” at Lviv National Opera includes many ballet scenes, such as the solo dance of the Prince of Persia – the first love victim of Turandot. The choreographer of the opera is Diana Theocharidis, who developed choreography online in collaboration with the ballet tutor Igor Khramov, and Stratos Mpapagiannakis, Kostantinos Kafandaris from Greece.

The embodiment of the terracotta army – the legendary imperial army, which was designed to protect the state both in the real world and in the afterlife, plays an important role in set design and images of the choir. The stone Chinese soldiers show no sympathy for the executed princes, and only death of Liu evokes their feelings – and therefore life.

This is not the first time the composer admired the exotics distant countries – in his previous operas “Madama Butterfly” the action takes place in Japan, in the opera “La fanciulla del West” – in the American Wild West. This time Puccini was fascinated by the fabulous Peking. Escape from Europe to the mirage of the exotic East, the world of fairy tales about the breath-taking beauty of the Princess and rich Chinese culture, which will never be fully comprehended by the Western world, became the last exotic journey in the composer’s creativity.