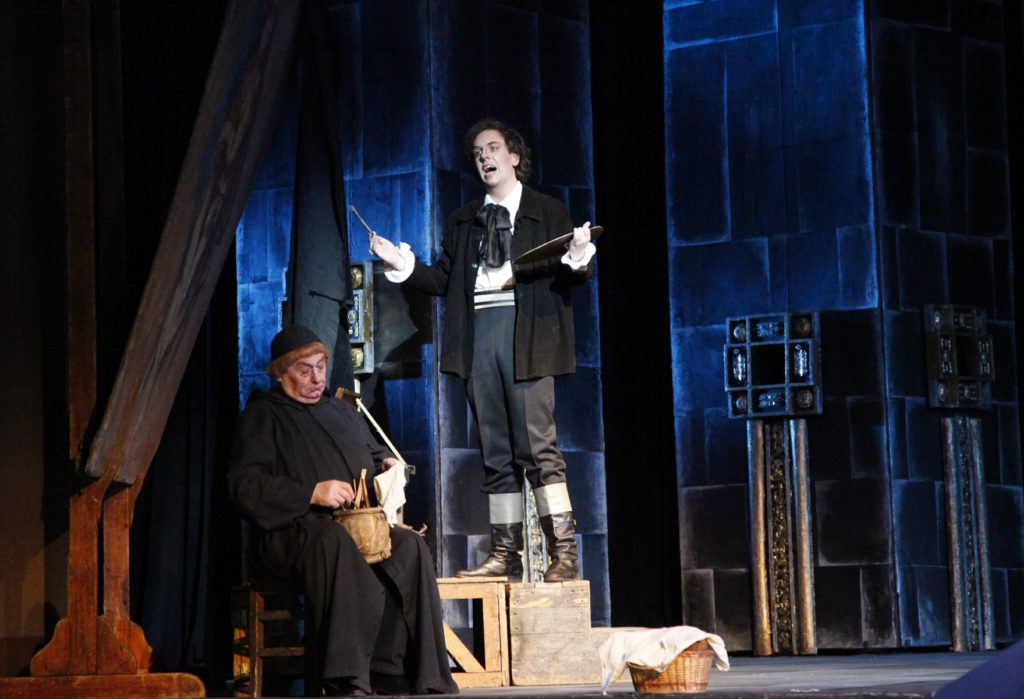 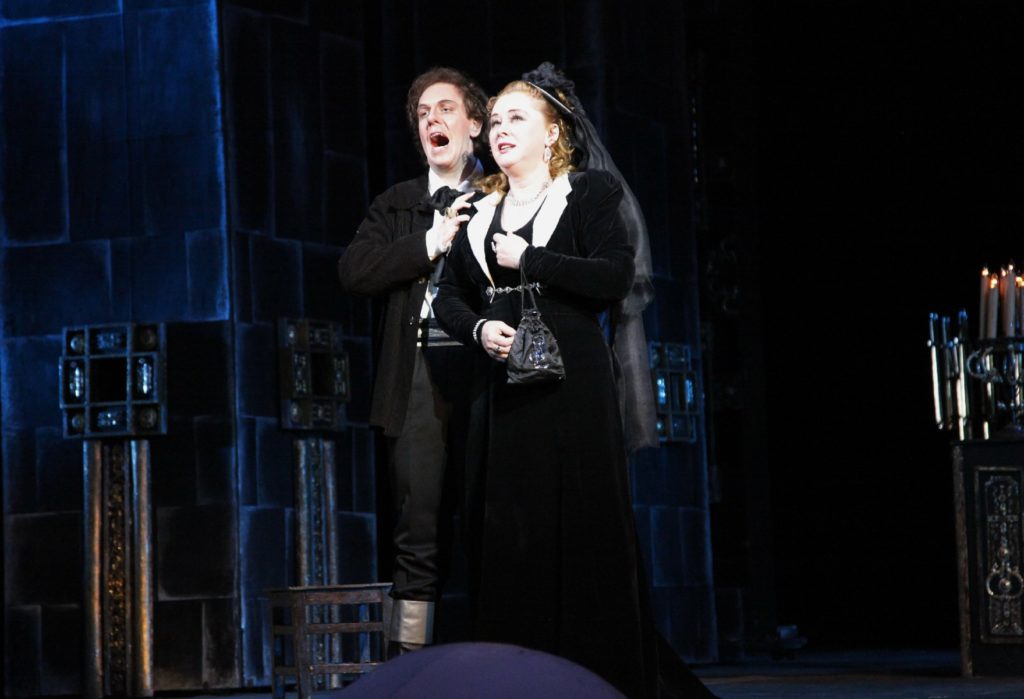 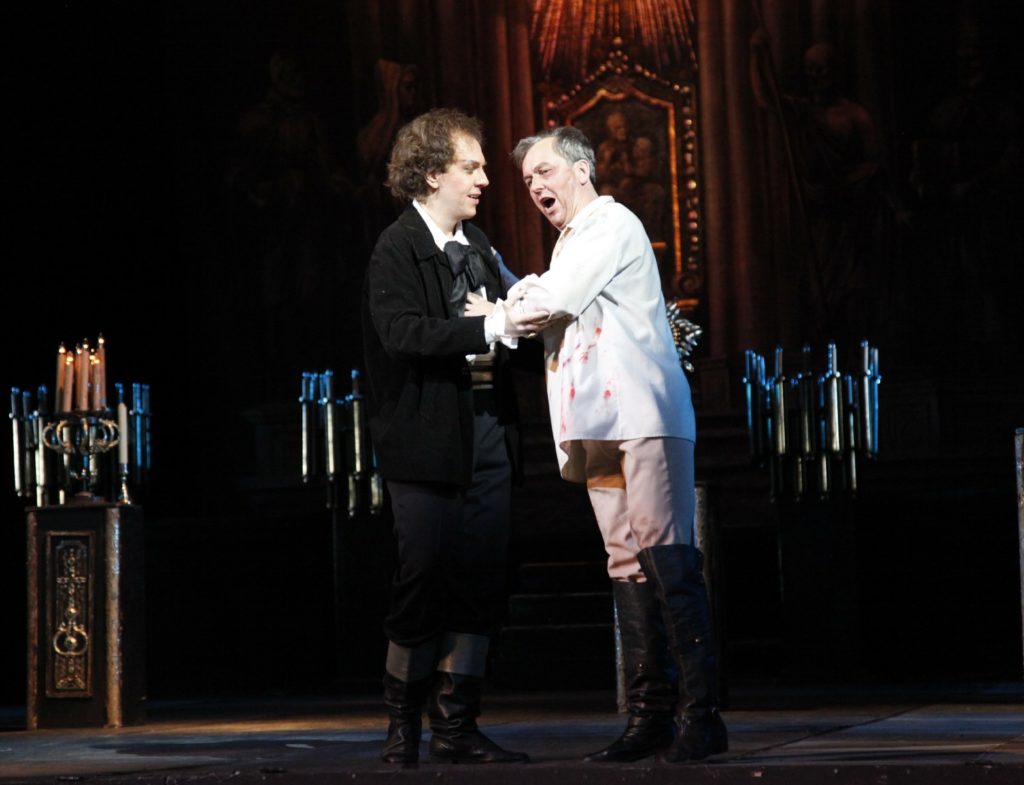 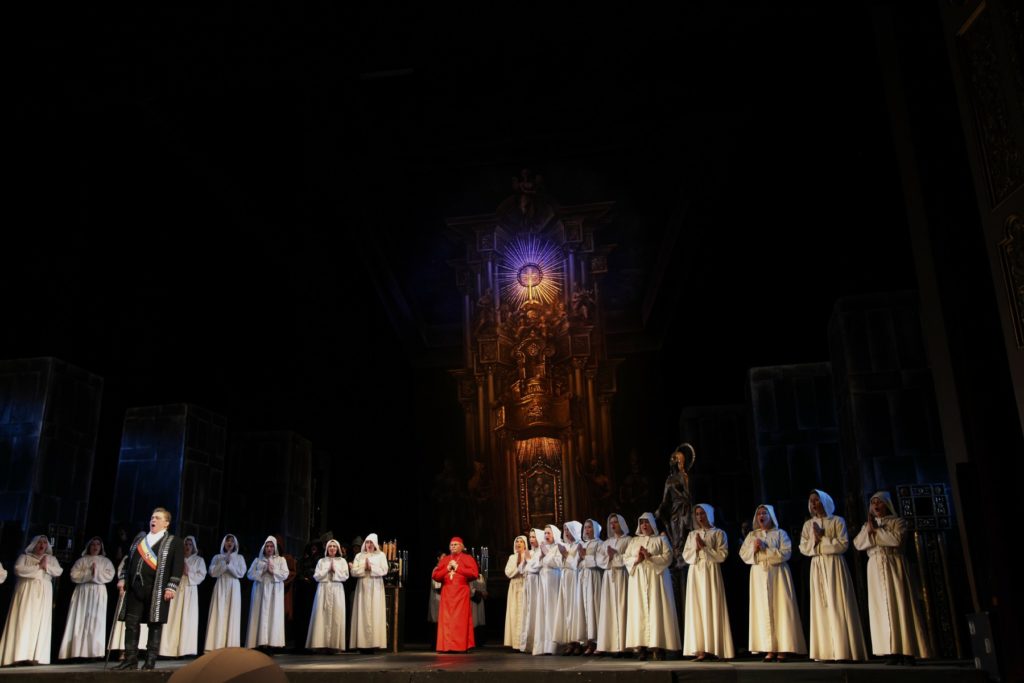 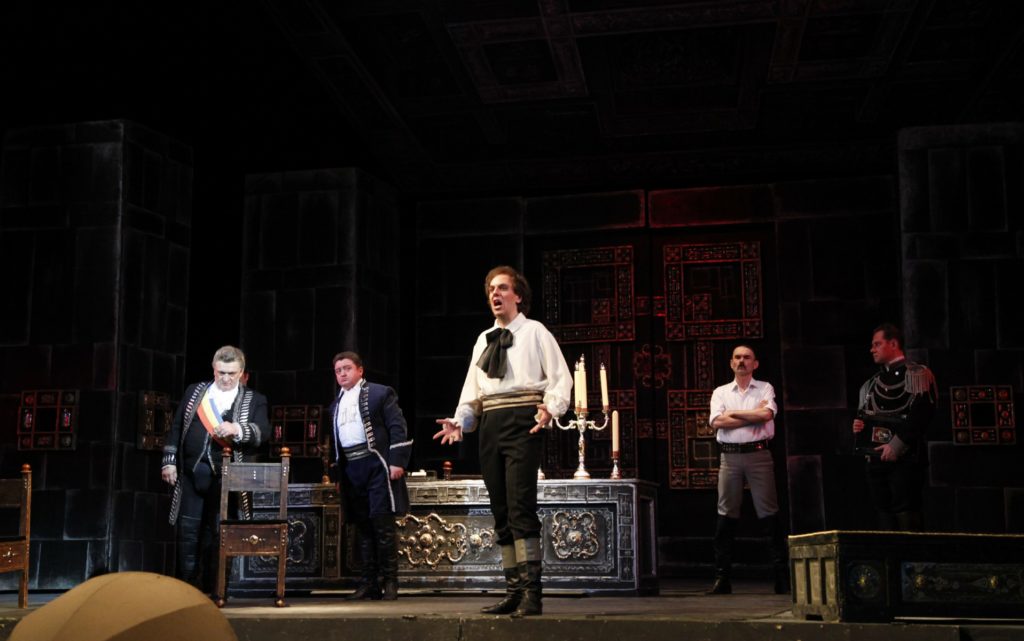 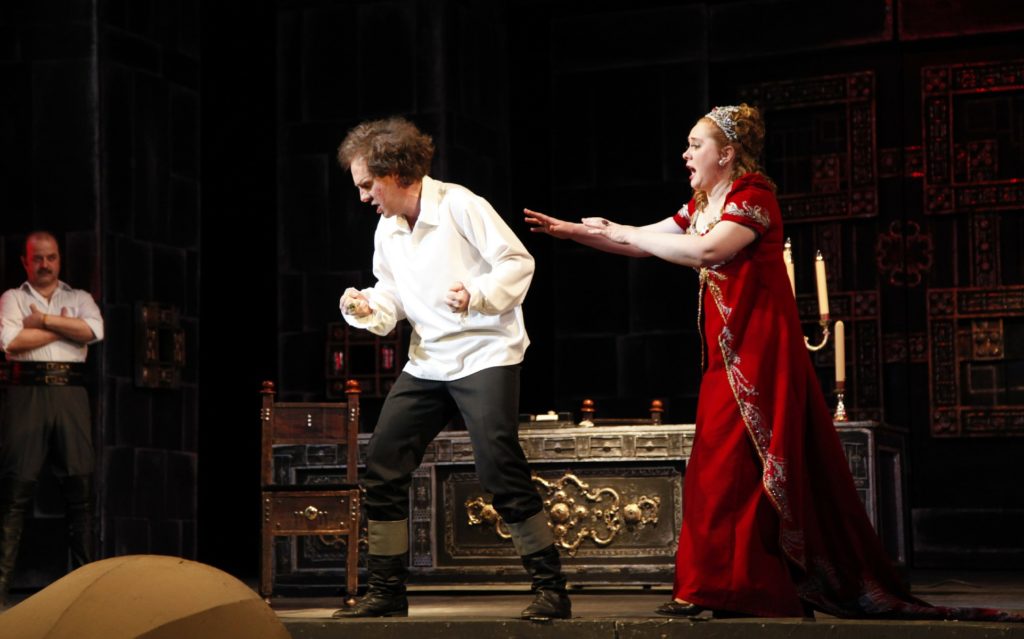 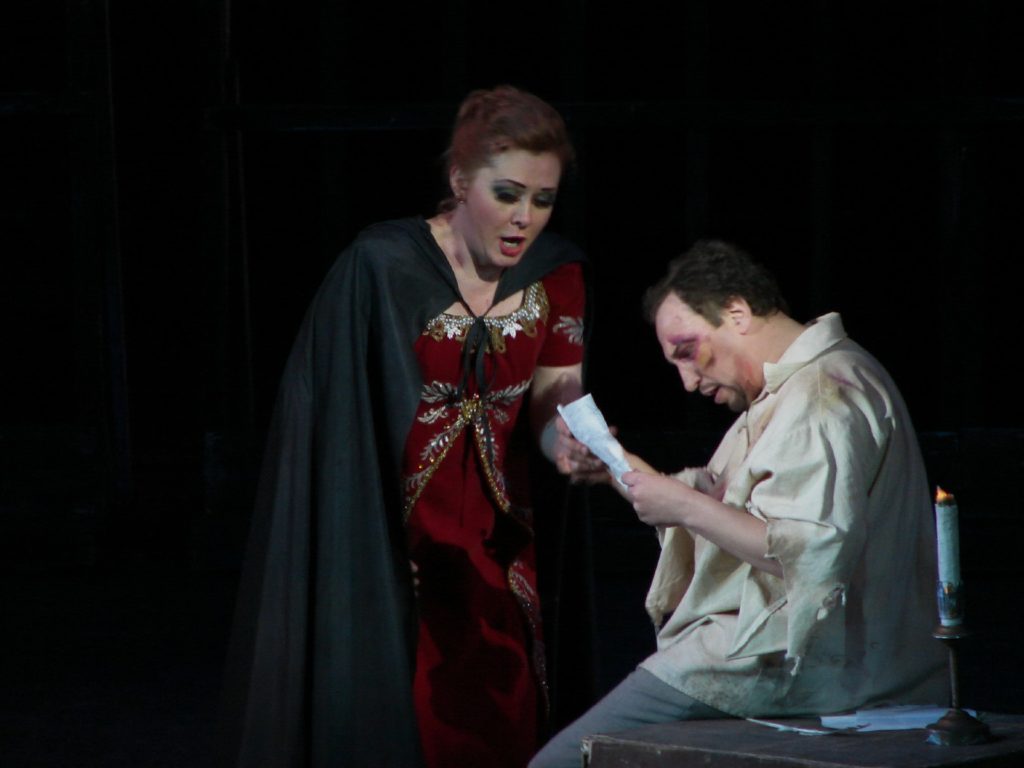 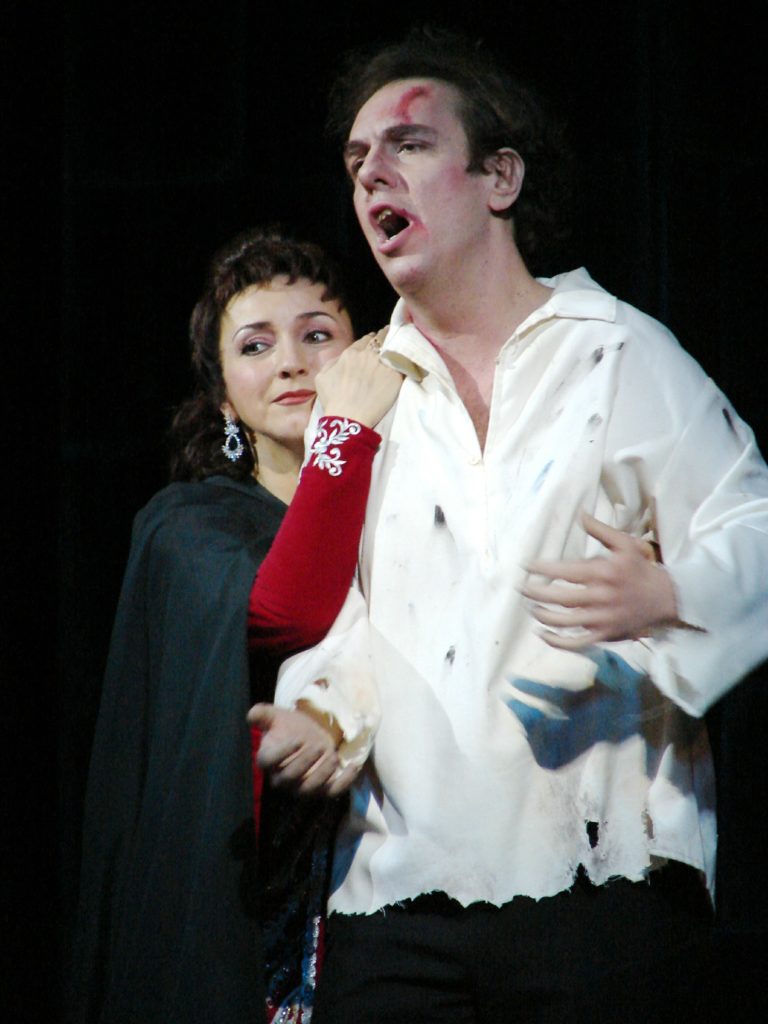 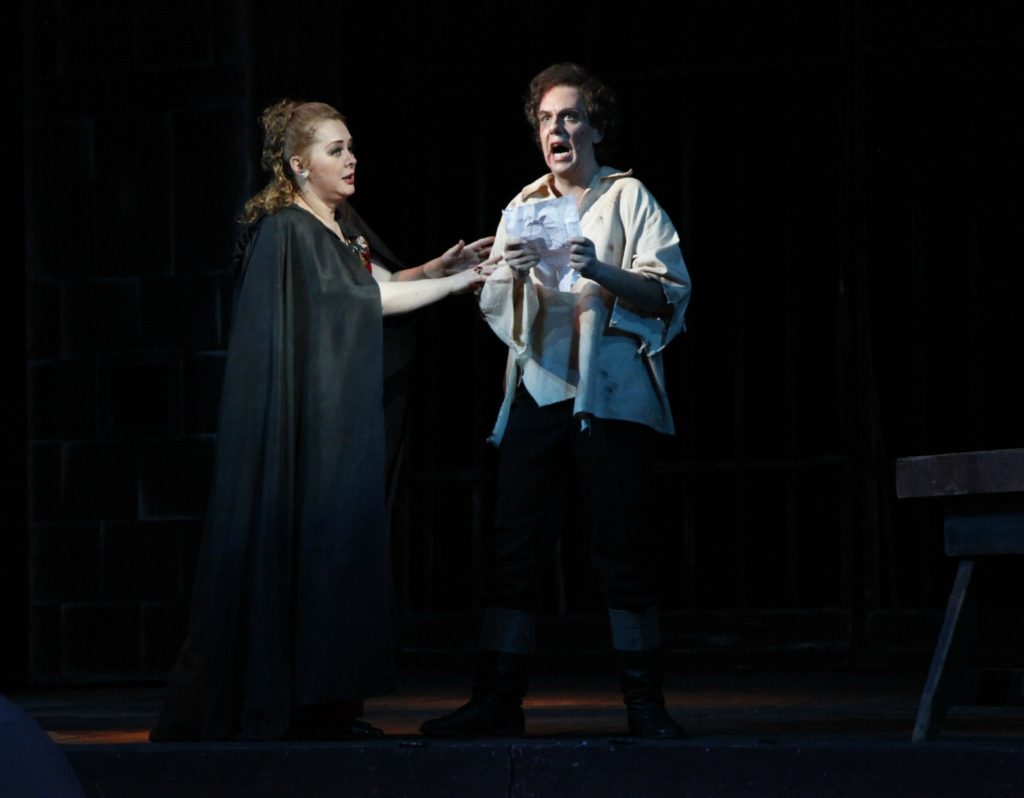 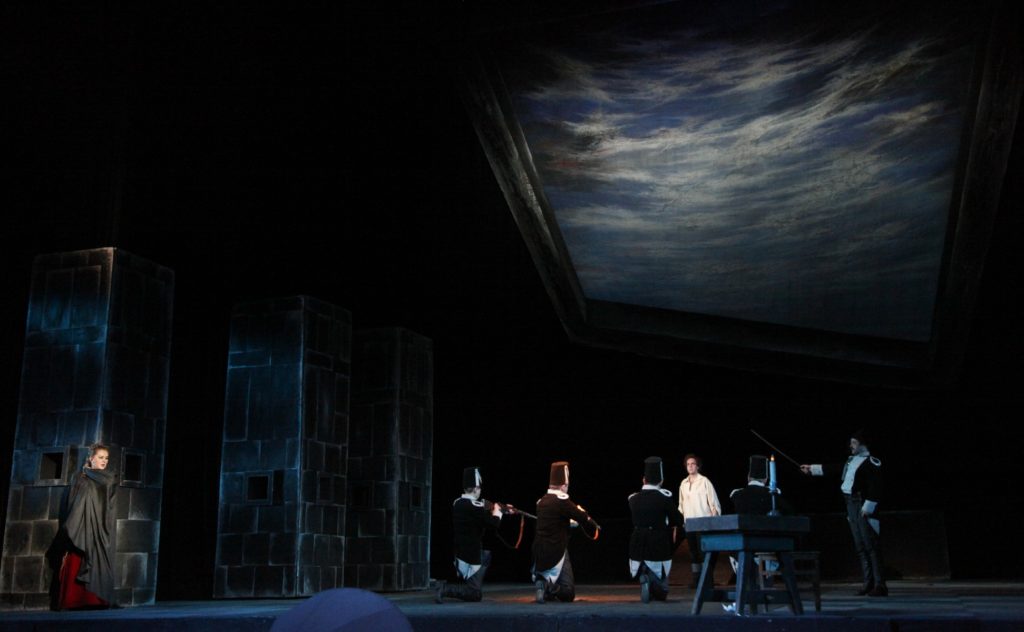 The Church of Sant’Andrea della Valle, Rome
Angelotti, former Consul of the Republic of Rome and now a political prisoner who has escaped from prison, enters exhausted. He hides in the chapel of his sister, the Marchesa Attavanti. The artist Cavaradossi is working on an image of Mary Magdalene. The Sacristan is shocked that the painting resembles a woman in his congregation. Cavaradossi denies the resemblance: only Tosca occupies his thoughts and his brush could paint the features of no-one else. After the Sacristan leaves Angelotti emerges from the chapel. He knows the artist and trusts him, and so he begs for assistance. Hearing Tosca’s voice, he hides again. The singer notices the painting of Mary Magdalene resembles the Marchesa Attavanti. Tosca’s jealousy erupts but the artist manages to pacify her. Floria leaves and Cavaradossi offers the fugitive refuge in his home. Gunshots are heard – the escape has been discovered. The men hurry away.
A celebratory mass begins. Scarpia, chief of police of Rome, and police agent Spoletta are among the worshippers. They are interested in the Attavanti Chapel where they expect to discover Angelotti, but find a fan left there by the Marchesa and an empty food basket. Seeing Tosca return to the church in the hopes of seeing her beloved again, Scarpia decides to seize his opportunity. He cunningly provokes Floria’s jealousy. When she runs out of the church, Scarpia sends police agents after her, believing that the infuriated Tosca will lead them to the artist’s secret hiding place.

The Farnese Palace
Scarpia is in his apartments awaiting news from his agents. His expectations are only half fulfilled: Tosca did lead them to Cavaradossi who has now been arrested but Angelotti remains at liberty. Scarpia hopes to torture the artist into revealing the truth and orders Tosca be brought to him. The chief of police himself begins Cavaradossi’s interrogation but to no avail. The artist manages to whisper to Tosca to keep the secret at all cost. He is led off to be tortured. His groans and screams make Floria lose her self-control and she reveals the secret hiding place in the garden. Scarpia orders an end to the torture.
In agony, Cavaradossi is thrown at Tosca’s feet by the soldiers. He hears the chief of police and understands that the secret has been revealed. He curses Tosca. Scarpia orders that he be taken away and executed in the morning. In answer to Tosca’s pleas, he says he will spare Cavaradossi’s life if she will be his. In Tosca’s presence the chief of police gives an ambiguous command and issues a pass for her and Cavaradossi, allowing them to leave Rome. Tosca, however, does not realise that the execution will be real. Scarpia runs towards Tosca and, defending herself, she kills him. Staring at the corpse in horror, she carefully removes the pass from Scarpia’s hand and slips out of the palace.

The platform of the Castel Sant’Angelo
Cavaradossi’s execution is to take place here. Overwrought, Tosca rushes in and explains it is to be a mock execution. Mario has to play his part well so the soldiers suspect nothing, and then they can flee the city. The soldiers appear. They fire and the artist falls to the ground. Floria calls his name in vain. Realising he is dead, Tosca throws herself from the parapet.

“Tosca” is one of the best works of Giacomo Puccini and is in top list of the world operas.

The opera was premiered on January 14, 1900 in Rome at the Teatro Costanzi. Opera still has great success due to wonderful music and exciting plot. The love story of the opera singer Floria Tosca and the artist Mario Cavaradossi unfolds on the background of historical events illustrating the tragedy of 1800 when Napoleon’s army invaded Italy.